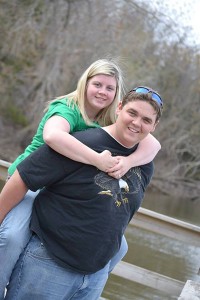 Brittany is the daughter of Paul Poppe and Janet Poppe of Trimont.

Joshuah is the son of James and Rebekah Sousa.

The bride is a 2007 graduate of Martin County West High School and is a medication aide at Good Samaritan Society of Grand Island, Neb.

The groom is a 2008 graduate of Albert Lea High School and is an assistant store manager at Home Depot in Grand Island.