Rosemaling is a Scandinavian thing 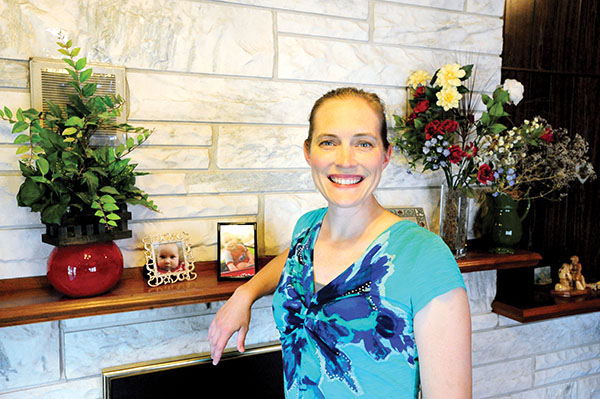 We celebrated my grandfather Norman’s 85th birthday when he was in end-stage lung cancer. My cousins and I were mostly in our late teens and early 20s, and we had come to North Dakota to see him one last time. It surprised me when he told us he felt like he was still 25 years old — not much different than us — but his body had worn out on him. It had never occurred to me before that Grandpa, from my earliest memory of him, was anything other than an elderly man.

It’s not so unusual, I suppose, that I’ve come to appreciate older things as I’ve aged myself. One such thing is rosemaling. If you’re like many people in the Upper Midwest who either have some Norwegian heritage or married into a family with Scandinavian lineage, you’ve probably encountered examples of rosemaling. If you aren’t familiar with it, it is decorative folk art that originated in Norway and Sweden (where it’s called kurbits) and usually features stylized flowers and scrollwork. 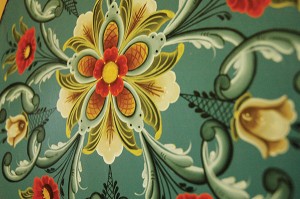 It’s an old artform made new by contemporary artists, and most often the painting is done on wood. In my childhood home, we had rosemaled wooden plates, wooden spoons, several boxes, a toy sled, and a small bench that my mother’s great aunt Marie decorated in vivid 1960s-inspired hues.

Rosemaling also embellishes “Velkommen” signs in many doorways. As a beginning reader, I thought it spelled the greeting “welcome in.” Pronouncing the “v” as a “w” seemed curious, but the English language has many oddities, like the way milk is spelled with an “i” but pronounced “melk.” (Or so I thought.)

If you associate with Norwegian-Americans despite their funny accents, you may spot rosemaling just about anywhere in their homes. The person who wins the prize for most creative use of rosemaling is my friend Jennifer Zoller’s late grandmother, Mae Harsh, who lived in Osakis. Her friend rosemaled her wooden toilet seat lid. Lift up the lid, and, Hallo!, a forest nymph peeks out between more fancy scrollwork on the underside.

A person must have a young heart and a fantastic sense of humor to place such ornamentation in their bathroom. I never even met my friend’s grandmother, and now I won’t forget her.

I’ve mentioned my mother’s great aunt Marie Gjellstad Hauge in a previous column, and she is one who has passed along her memory in thousands of paintings. Many are still in family hands and are spreading out to an expanding number of descendants in the Gjellstad family.

My cousins recently held an estate sale at their parents’ house, and a person inquired about a painting of Marie’s on the wall. He offered one my cousins $500 for it, but she said it wasn’t for sale. He called back later and offered $1,000. That is the point when I probably would have blurted out, “And when would you like to pick it up?”
My cousin politely reiterated, though, that it isn’t available. Kudos to her for helping maintain a family legacy.

Perhaps it seems strange to have so much affinity for the work of this woman we never met, who was both an accomplished painter and a skilled horsewoman, and who homesteaded in her own name in the early 1900s. I guess she has taken on larger-than-life proportions to us.

Family legend has it that she — along with a sister, both unmarried at the time — named her brother’s first six children, including my grandpa Norman. When it came to the birth of her seventh and last child, my great-grandmother Anna put her foot down, and my great aunt Verna is proud to have the distinction of being the only baby named by their mother.

Though my great-grandmother seems to have been shut out of many decisions early on, she was sweet-tempered and her children had great affection for her. Anna had more leisure time when Verna was growing up, and they played cards together when Verna came home from school. On her deathbed, Anna removed her wedding ring and told her older daughters to give it to Verna when she arrived. Verna was just 20 years old and planning her own wedding at the time. Verna still misses her mother greatly, and she has worn Anna’s wedding ring for nearly 70 years.

I enjoy talking with Verna because she has never lost her sense of youthful fun, and she’s my last living connection to my great-grandmother, who died over 30 years before I was born. She also reminds me of my grandfather; her speech bears the same Norwegian inflection his did. I miss my grandpa, too, and wish I could see him laugh one more time. This June we will remember what would have been his 100th birthday.

Jennifer Vogt-Erickson taught social studies in Albert Lea for more than six years before staying home to raise
children. She lives with her husband, Jeshua, and their two young children, Trixie and Axel. She wrangles toddlers by day and writes by night.