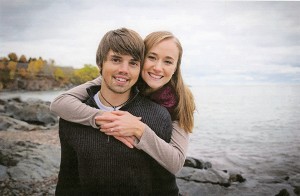 Abby is the daughter of Dave and Lisa Sauer of Forest Lake and the granddaughter of Harry and Arlene Strusz.

Brian is the son of Scott Elliott of Fountain Hills, Ariz., and the late Jill Elliott. Grandparents are Bill and Frieda Elliott of Albert Lea and Rod Lee and Bev Lee of Fargo, N.D.

The bride is a medical student at the University of Minnesota, Duluth.

The groom is minister of worship and music at Illumination Church in Burnsville.