Tiffany Ann Schrader of Albert Lea and Seth David Buchanan of Glenville were married at 4:30 p.m. Oct. 26, 2013, at First Lutheran Church in Albert Lea in a double ring ceremony. 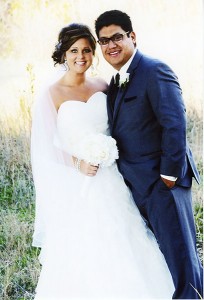 A reception was at America’s Best Value Inn in Albert Lea.

The couple will live in Glenville.

The bride is a graduate of Albert Lea High School and University of Minnesota, Duluth. She is employed by Dist. 241.

The groom is a graduate of Glenville-Emmons High School and Rochester Community College. He is employed by Buchanan Family Farms.

Guest book attendant was Jessica Lokken, cousin of the bride.

Gift attendant was Shafer of Overgaard, cousin of the bride. Punch pourers were Makayla Ryks and Laney Ryks, nieces of the groom.