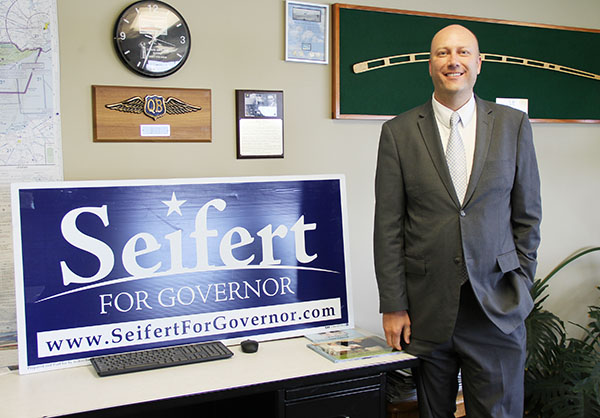 Just days after a heated Republican convention for Minnesota governor, former state House Minority Leader Marty Seifert stopped in Albert Lea on Wednesday to talk about what sets him apart from the other candidates.

Though he did not win the party endorsement Saturday during the convention, Seifert, of Marshall, said he plans to move “full steam ahead” with his campaign.

“I’m not afraid to be a maverick,” he said, during a quick visit at the Albert Lea Municipal Airport. “Minnesota likes mavericks.”

He said the last four out of five governors in Minnesota were not endorsed by a major party.

“A lot have gone against the machine, and they won,” Seifert said.

The statement comes after Hennepin County Commissioner Jeff Johnson won the endorsement during the convention in Rochester. Seifert said he is the only Republican candidate for governor who lives outside the Twin Cities, and he said he doesn’t take money from lobbyists.

The candidate said he has worked real jobs, including that of a teacher and small business owner, to name a few, and he understands what it takes to have to pay bills. His most recent job was as the executive director of the foundation for the hospital in Marshall.

If elected, he said he will focus on things such as fixing problems with health care, creating a more job-friendly environment and promoting schools “that work.”

“Our main thing is we want a vision for Minnesota to make the state better,” he said.

To spread the message, he and lieutenant governor running mate Pam Myrha of Burnsville are splitting their time between the rural and metro parts of the state.

The last time someone from southern Minnesota was elected governor was in 1978 when Al Quie of Dennison was elected.

Seifert’s visit to Albert Lea was part of a 16-city tour that began Tuesday and was expected to conclude today.

Other stops planned for Wednesday included Austin and Rochester. He said he plans to do a town hall meeting in Albert Lea this summer.

“I have not and will not treat Albert Lea as flyover country,” he said.