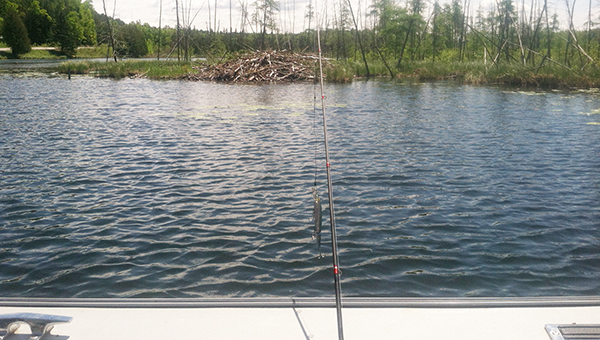 A boat trolls past a beaver lodge on North Star Lake, which is part of the natural beauty that can be found while fishing many northern Minnesota lakes. — Provided

I don’t think that a grandfather can ask for anything more rewarding than being able to spend time fishing with a grandson. This past week, I was rewarded by heading north to the cabin with my grandson Dylan, and I’m pretty sure that Dylan had as much fun as I did. The fish also cooperated, and at times they seemed to be almost as hungry as the mosquitoes. I have to confess that I am not a die-hard walleye fisherman, but I will seek them out from time to time. I can tell that Dylan was largely influenced by me and Brad, his dad, because he loves to fish for pike, bass and panfish.

This week, he was able to do just that. Our first day, I visited one of my favorite lakes. Although the weather was perfect, it was one of those days that can actually be a little too perfect. Sunny, warm and no breeze does not make for very good fishing on most of the clear-water lakes of northern Minnesota. Early morning and evening afford the best times to catch fish in those conditions.

As day turned into evening, we decided to head for the access without much luck. As we approached the access, I told Dylan we should stop for a moment and cast ultralights in this little bay for a while. We immediately began catching bluegills, crappie and bass. My hunch paid off because past experiences have yielded good results in that area. We caught a lot of fish and kept a few for table fare.

The next day, we got up fairly early and headed to another lake that has been a good panfish and pike lake in past years. Unfortunately, we were only on the water for about half an hour when a storm moved in. Luckily, we had just landed the boat when the storm hit. It continued to rain for most of the day, so our fishing had to be put on hold. I don’t mind fishing in the rain, but being on a lake with thunder and lightning all around isn’t my cup of tea. Having a little down time gave Dylan the opportunity to force grandpa into cleaning out his old brown tackle box and replacing it with his newly acquired one. Now, old brown had a lot of memories, but I had so much tackle in it that it took five minutes to find anything — let alone untangle the lure I was seeking. I believe it took over two hours to rearrange my tackle, but I have to admit that I do like it — you know what they say about old dogs and new tricks. The next evening, I managed to find one of the hooks that had fallen on the floor. It ended up stuck in the side of my big toe. Ouch!

I had heard that the mosquitoes were extremely bad in northern Minnesota this year, but I believe that they exceeded my expectations. Every time I stopped to do anything outdoors, they were like bees on honey and would always find the one spot you missed when spraying repellent on your exposed skin. Dylan said that they could probably market Repel as the fisherman’s version of cologne.

On our third day at the cabin, we planned to visit Spider Lake. We decided to get up early, have a light breakfast and pack a lunch for the day. We had originally wanted to hit the lake on Saturday because that was the first day of muskie fishing. However, since the weather didn’t look very promising, we decided to fish it on Friday.

Once on the lake, we fished a certain spot that I had always enjoyed good luck with early in the season. It didn’t take long before Dylan had a nice pike in the boat that was too big to keep. All northern on Spider Lake between 24-36 inches must be released, but you can keep one more than 36 inches and three less than 24 inches. Dylan used a rig he called a snell rig but an old school fishermen like myself would just call it a little Joe. I tried my trusty shad-colored Shad Rap and caught a perch and not much else. I finally decided to take a lesson from the student and try what Dylan was using. Let’s just say that you are never too old to learn a new trick or two.

For the day we caught well over 20 pike, and Dylan caught his first smallmouth bass. We also caught some largemouth bass and kept two pike that were less than 24 inches and just right for the frying pan. The shorter northern on Spider Lake have always been nice and thick, and a 23-incher is just perfect for the skillet. Dylan asked me how I knew about that spot, and I told him that it came from fishing the lake for many years. It’s all about spending time on the lake; the more time you put in, the better chance you have of catching fish. Dylan told me that it was the best single day of fishing that he ever had, and that brought a smile to grandpa’s face.

Dylan was really looking forward to fishing muskies, so on our last day there we decided to try North Star Lake, which is a good muskie lake. The weather was clear and warm, but the strong winds made it difficult to fish. We tried to fish protected bays, but there were numerous other folks who had the same idea. Even though we didn’t catch but a couple of pike that day, it was just great to be spending time on the lake.

Catching fish is fun, and that’s the ultimate goal, but enjoying the beauty of the area and taking it all in is what it’s all about for me. I know that Dylan had a good time and that we will both have some great memories to look back on. We are both looking forward to getting back to the cabin again soon to make some new memories.

Until next time, any time is a great time to enjoy a little fishing and now is a perfect time to introduce a kid to fishing. Remember to play safe, and if you’re in a boat be sure to wear your life jacket.

It doesn’t have to be a special holiday to remember those who served and those who gave the ultimate sacrifice so that we are able to enjoy all the freedoms that we have today.