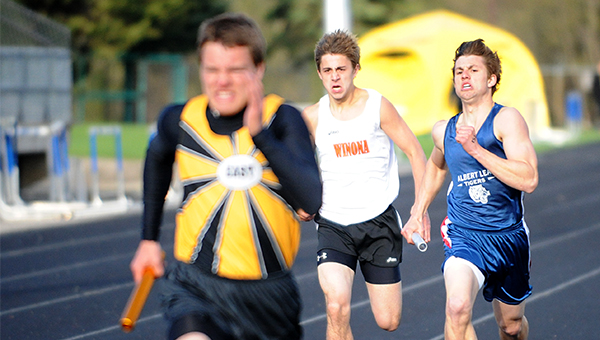 Preston Smith of Albert Lea runs a relay on May 13 during a home quad against Faribault, Mankato East and Winona at Albert Lea. Smith qualified for the Class AA state track meet in the 300-meter hurdles. — Micah Bader/Albert Lea Tribune

Throughout his senior year, Albert Lea’s Preston Smith proved he’s one of the fastest athletes in Minnesota.

This fall, Smith qualified for the Class A state swimming meet in the 100-yard butterfly along with teammate Derek Wagner, who qualified in the 100 backstroke. Albert Lea hadn’t produced a boys’ state swimming qualifier since 2008.

Smith’s success continued this spring when he ran a personal-best time of 40.39 seconds in the 300-meter hurdles Saturday at the Section 1AA meet at Lakeville South High School to qualify for the Class AA state meet.

“I’m honored to have gone to state in both sports,” he said. “I didn’t think it was going to happen in either of them, but it’s fun to go out with a bang before I graduate.”

“He’s handled it well,” Gentz said. “He’s just excited to make it this far and have the opportunity to score at the state meet, run his best and represent the city of Albert Lea.”

In preparation for the state meet, Gentz said he has been modifying Smith’s workouts with volunteer assistant coach, Jerry Kaphers. Smith rested on Sunday after Saturday’s section meet. He had an intense workout on Monday, continued with jogging and stretching on Tuesday and had a warm-up, stretch and cool down on Wednesday and scheduled for today.

“We hope to give him plenty of rest and take advantage of fresh legs on Friday,” Gentz said.

Smith said he values the input from his coaches to improve his technique.

“Coach Gentz, Kaphers and Lon (Nelson) watch my races with their hawk eyes, and they’ll tell me what I did wrong and what I need to work on,” he said.

Smith said he also has spoken with Brody Sunblad, who was the last Albert Lea athlete to qualify for state in the 300 hurdles.

At the Class AA state meet at Hamline University, Smith is scheduled to run in lane eight of heat two of the prelims at 11:44 a.m. Friday. He will be between Mykal Riley of Shakopee in lane seven and the edge of the track.

According to the Minnesota State High School League, the top two finishers of each heat will qualify for finals along with the runners with the next five best times. The Class AA and all-time state record was set in 2012 by Rilwan Alowonle of Cottage Grove in 36.59 seconds.

To start the school year in the fall, Smith was a captain on Albert Lea’s boys’ soccer team. He said soccer is his favorite sport, and he originally joined the track team to stay in shape for summer soccer. As a three-sport athlete, Smith decided against specializing year round in one sport and said each season prepared him for the next.

“I’d get bored if I had to play one sport all the time,” Smith said. “If I just played soccer, I wouldn’t have learned half of the stuff I learned in swimming and track. I think it’s good to get involved with as many things as you can.”

What: 300-meter hurdles at the Class AA state track meet

Three area athletes from Class A qualified for the state track meet.

United South Central/Alden-Conger’s John Schuster will look to stay undefeated in the 400-meter dash this season. He set a time of 50.44 seconds at the Section 2A meet Saturday. No one in the field has broken 50 seconds, but Rushford-Peterson has come the closest with a time of 50.09 seconds. Schuster’s seed time is fourth best in the 16-runner field and second in his heat. He will run in lane five, next to Carlson in lane six.

NRHEG’s T.J. Schiltz will look to improve on his fifth-place finish last season at state. He’ll have to do so in a tough field. Waseca’s Shane Streich has the top seed time of 4 minutes, 18.55 seconds, and eight other runners are in the 4:20s. Schiltz’s seed time is 4:37.53.

Carlie Wagner, the Associated Press girls’ basketball Player of the Year, qualified for state in the high jump. Her seed height of 5 feet, 4 inches is second in a field of 19 jumpers. Only Machaela Hesse of United North Central has a higher mark at 5-5. Deidre Hahn of Warroad won the event last year with a leap of 5-6, the Class A state record is 5-9 and the Minnesota all-time record is 5-10.