The youth are the future of our outdoor heritage

I always seem to get a good feeling inside whenever I see a kid who gets excited about fishing. In these fast times of technology, there just don’t seem to be as many youth who want to commit to having a little outdoors fun. Lucky for me, I have grandchildren who have been exposed to outdoors activities and actually enjoy fishing and hunting. I like to think that I had a hand in exposing them to fishing and have actually taught them a thing or two along the way. 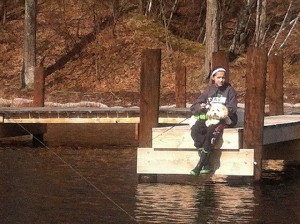 A young girl holds a little dog in her lap while fishing from a dock on Gull Lake on opening day. — Dick Herfindahl/Albert Lea Tribune

Trevor, my oldest grandson, has been a fisherman for about as long as he was able to hold a fishing pole. As he grew into a young man, he has actually turned the tables and has been teaching the old teacher a trick or two about fishing. Over the last few years, he has expanded his interests to bowfishing for carp. His brothers Taylor and Grant are right there alongside him trying their luck. I can see where that can actually be a sort of hunt-fish combination because you have to walk the creek banks in search of the fish.

On the other hand, their cousin, Dylan, is strictly a hook-and-line guy when it comes to fishing. This past weekend, he and his dad readied the boat to go on Friday night. On Saturday morning, grandpa picked him up bright and early, and we headed to Fountain Lake. Once the boat was in the water, Dylan drove and old grandpa sat up front and concentrated on fishing. I told him that this was how it should be; he is now the skipper and I am just along for the ride. I have a picture of him driving my boat when he was just 4 years old. He thought that it was pretty big stuff back then. What an enjoyable morning it was spending time with my grandson, and both of us caught a few fish to boot. It was one of those times spent making memories that I will always cherish.

Dylan has always enjoyed fishing, and we are definitely going to take a trip or two to the cabin this summer. Dylan not only enjoys fishing, but he also seems right at home being the skipper. Trolling is what he likes to do best, so I guess grandpa must have taught him well. When he was younger, he would change lures just about every 10 minutes, but now he has a favorite or two and pretty much sticks with what works for him. Having confidence in your presentation and in your lure is a big part of what keeps a person excited about the sport, and it also helps to catch fish.

I can’t help but feel proud that all of my grandsons like to fish and hunt. When it comes to waterfowl, Trevor may be just a little over-the-top because there is early goose, spring goose and the regular fall waterfowl seasons that take up almost all of his spare time. His brothers and cousin, Dylan, are also into all types of fall bird hunting. Dylan’s sisters Emma and Ava will be the next people who I want to introduce to fishing. Emma already loves being outdoors, and getting her to come inside can sometimes be a challenge.

We must remember that these generations and the ones that follow are the future of hunting and fishing, and if we want to preserve it for these generations we must get the youth involved. There are many good sportsmen’s groups that are doing their part to promote their sport by getting the youth involved. Locally, there is the Fountain Lake Sportsman’s Club which has the Take a Kid Fishing Day, which now includes an ice fishing event. Other groups are the Minnesota Deer Hunters, Ducks Unlimited, Pheasants Forever, Turkey Federation, Pheasant & Habitat, Minnesota Waterfowl Association and many more that I am no doubt forgetting.

We are fighting an uphill battle when it comes to trying to get the kids outdoors and away from the electronic world that surrounds us. I usually go for a walk every morning, but on Saturdays I may not start until around 8 a.m. or so. I call that sleeping in. A few years ago, I began to notice something that wasn’t happening: kids outside playing. Looking back on the days when my sons were young, watching cartoons was the only thing that kept them inside — and that wasn’t for very long. They had to be outside doing something, whether it was riding the Big Wheel or Green Machine and later when they graduated to bikes they became more mobile. Both of them played some organized sports like hockey, baseball and football, but I know that the most fun they had was playing hockey at the park or baseball and football in the backyard. I believe that kids need time to just be kids and not have all of their activities mapped out for them. When was the last time that you saw a group of kids playing a pickup baseball game at a park?

Until next time, any time is a great time to enjoy a little fishing, and now is a perfect time to introduce a kid to fishing. Remember to play safe, and if you’re in a boat be sure to wear a life jacket.

It doesn’t need to be a special holiday to remember those who served and those who gave the ultimate sacrifice so that we are able to enjoy all the freedoms that we have today.