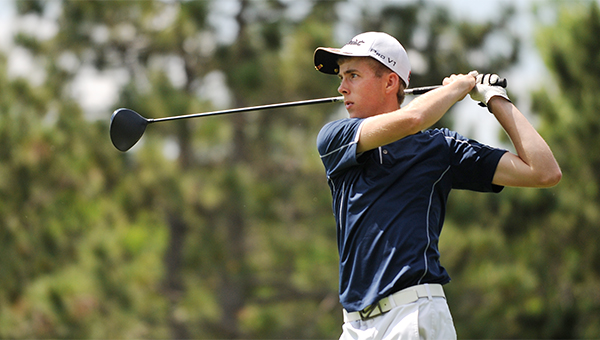 Ryan Pederson of United South Central drives the ball on hole No. 5 Tuesday on Day 1 of the Class A state golf Tournament at Pebble Creek Golf Club in Becker. — Micah Bader/Albert Lea Tribune

BECKER — After Day 1 of the Class A state golf tournament, the United South Central boys’ golf team is one of two frontrunners in the hunt for a championship.

“We’re one stroke out of first place, so we’re going to try to contend and bring home a title,” said USC coach Brad Huse. 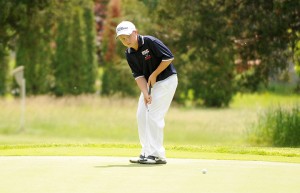 The Rebels completed the first 18 holes in 335 strokes Tuesday at Pebble Creek Golf Club in Becker. The only squad in the eight-team field to post a better score was Dawson-Boyd with 334. Legacy Christian was third at 341, and Mille Lacs was fourth at 350.

USC made its third consecutive trip to state as a team and is aiming to improve on last year’s fourth-place finish and score of 677, which was one stroke behind third-place Legacy Christian Academy.

At the halfway point, the Rebels are four strokes better than they were last year, when they headed into Day 2 of the tournament with a score of 339.

A key difference between last year to this year was the weather conditions. Last year, the course was drenched in mist and rain. This year, it was sunny and 78 degrees with winds gusting up to 7 mph.

“The weather was ideal, and it helped that there was hardly any wind,” Huse said.

Ryan Pederson had the Rebels’ best round of the day by finishing the front nine in 38 strokes, and he added a 44 last nine holes.

The top four player’s scores combine to make the team score, and all of USC’s scoring players completed the course fewer than 90 strokes to finish in the top half of the 80-person field. 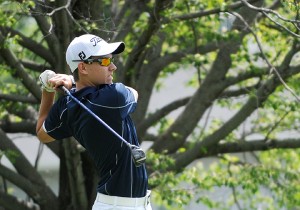 Nick Neubauer of United South Central tees off on hole No. 9 Tuesday on Day 1 of the Class A state golf Tournament at Pebble Creek Golf Club in Becker. — Micah Bader/Albert Lea Tribune

Seth Olson and Nate Pederson both shot 83s, and Nick Neubauer scored an 87.

On the final hole of the front nine, Nate nailed his putt to knock in a birdie.

“We’ve been working on our short game a lot,” Nate said. “That’s important, especially when the greens are faster than the ones we usually play on.”

The USC girls’ team finished Day 1 in sixth place with a score of 413.

Kyley Bullerman and Veronica Schindler led the Rebels. Bullerman headed into Day 2 in 26th place after posting a score of 94, and Schindler is 47th with a 99. Last year, Bullerman shot a 108 and Schindler had a 103 through the first 18 holes.

A score of 109 by Katelyn Loegering and a 111 by Morgan Pyzick also factored into the team total.

The USC girls’ team is also on a return trip to state. The Rebels finished fourth last year.