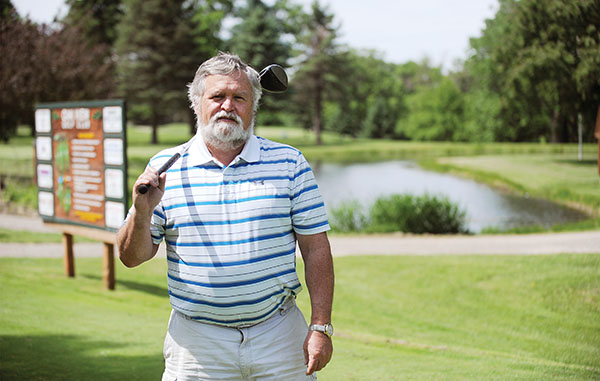 Carl Forderer of Wells stands near the clubhouse at Oak View Golf Club south of Freeborn.

For Carl Forderer, the benefits of walking during a round of golf outweighs the convenience of a golf cart. The Wells resident and retired psychologist said walking is good for his game.

“When I take a cart, it feels like it takes me two, three or four holes before I get loose,” he said. “Walking helps loosen you up quicker. It also builds and maintains the strength in your legs, and a lot of your golf swing comes from your legs.”

Playing a round without a cart has other advantages, like being cost-effective and providing exercise. It also is a way to preserve the course and the environment, Forderer said. 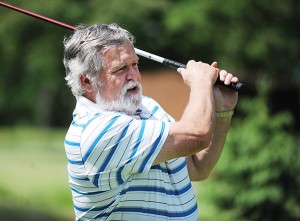 Carl Forderer of Wells swings his driver at north of the clubhouse at Oak View Golf Club.

“It’s easier on the course, and it’s cheaper,” he said. “There’s no reason to pay for something you don’t need.”

Forderer can be found with his bag of clubs at Oak View Golf Club two to three times a week, he said. He said his inspiration is his father, Bud Forderer, who introduced him to golf when he was 7.

“My role model for walking was my dad,” he said. “Back in the day, they had caddies. He always walked with a caddie until his later years when he had to take a cart.”

Part of Forderer’s love for the game comes from the thrill of competition.

“It’s a chance to still be competitive in sports,” he said. “When you get that perfect shot, there’s really not many feelings like that.”

When Forderer isn’t on the course, he enjoys following it on TV.

“Most people think golf is pretty boring to watch, but I love it — especially match play,” he said. “I like it (match play) because you play against the other guy, and not the rest of the field. It’s not the total score that counts. It’s how many holes you win.”

He said he also follows golfers from the University of California, where he is an alumnus.

Forderer was also inspired to walk from Clint Keeler, who played tennis into his 80s.

“He showed me that age is just a number,” he said.