Wallace E. Leland, 91, of Cheyenne, Wyo., passed away at his home Wednesday evening, June 18, 2014, surrounded by his loving family. 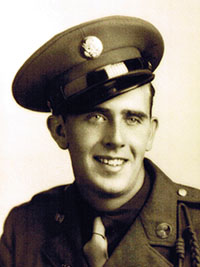 Wallace served in the European Theatre for the United States Army during World War II. Following his honorable discharge, he owned and operated a Standard Oil Station and later worked as an insurance agent for Modern Woodmen. His many interests included fishing in northern Minnesota and playing his guitar. He also enjoyed his service as the Bricelyn Fire and Rescue Chief, having directed and participated in over 100 rescue missions.

He is preceded in death by his parents, six brothers and four sisters.

His family will have a memorial service at 1 p.m. Thursday at Ascension Lutheran Church. Interment will be in Bricelyn at a later date. Cremation is under the direction of Schrader Funeral Home.

Expressions of sympathy in Wallace’s memory may be made to the Davis Hospice Center, 6000 Sycamore, Cheyenne, WY, 82009.

Condolences may be offered to the family online by going to www.schradercares.com.

Funeral arrangements are under the direction of Schrader Funeral Home in Cheyenne.