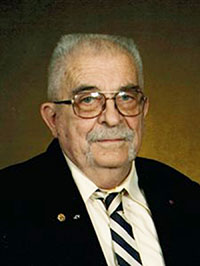 He was born June 6, 1932, in Steele County, the son of Alfred and Alice (Ballstadt) Yule. He graduated Owatonna High School in 1950.

He served in the United States Army from 1953 to 1955. He was in the Transportation Corp. and was stationed six months at Camp Desert Rock in Nevada for atomic testing.

He married Catherine Hanson on June 8, 1957, at Trinity Lutheran Church in Owatonna. He worked as a police officer for 15 years for the Owatonna Police Department. He also worked at Schmidt Equipment in maintenance, Gordy Fretham Excavating and Fabricated Wood in Owatonna, until his retirement. Wayne also was a private investigator for 26 years, a bail bondsman for 23 years for Goldberg Bail Bond and worked for Premier Security.

Wayne was mechanical. He built a sports car and enjoyed metal crafting. He also had a love for animals.

Visitation will be from 4 to 6 p.m. Friday at Michaelson Funeral Home and from 10 to 11 a.m. Saturday at Trinity Lutheran Church. A Masonic service will be at 7 p.m. Friday at the funeral home. Funeral services will be at 11 a.m. Saturday at Trinity Lutheran Church with the Rev. Dean Smith officiating. Interment will be in the Owatonna Memorial Gardens in Owatonna with full military honors conducted by the Steele County Military Funeral Unit. Memorials are preferred to donor’s choice.