Woman claims to be able to speak with dead, read the past 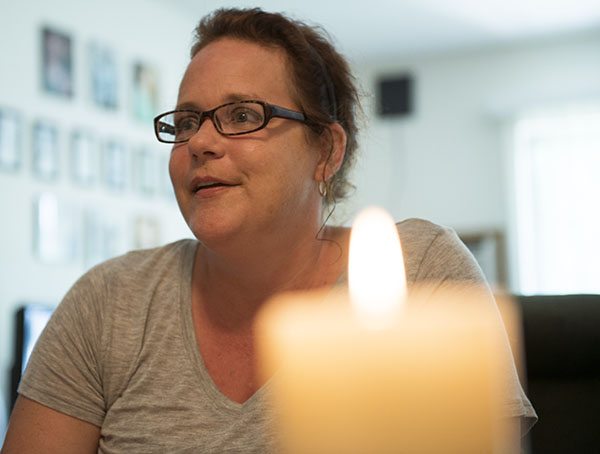 Psychic medium Susan Kalis offers readings from her home in Albert Lea. She said she was first told she had the ability by a local psychic she went to after her father passed away. – Colleen Harrison/Albert Lea Tribune

Albert Lea resident Susan Kalis, 47, has been doing readings for people for 14 years, but she came forward last fall when word got around the Gray Gables Apartments that she does them. It turns out, people were open with it. 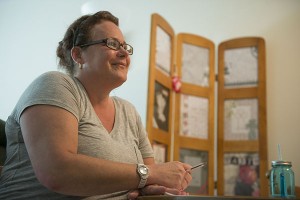 Psychic medium Susan Kalis doesn’t charge for the readings she offers from her Albert Lea home. “I do what I love,” she said. – Colleen Harrison/Albert Lea Tribune

“I hadn’t come out of the psychic closet because I didn’t believe there was interest,” Kalis said.

It all started back in 2000, back when Lake Mills resident Cindy Bartness did psychic readings over the radio for KQPR Power 96. Kalis called the show after her father died in 2000 and later got an in-person reading.

“That’s when she said I was psychic,” Kalis said.

She had done readings for friends and family but kept it to a minimum until lately. She describes herself as a psychic medium. She said “medium” describes a person able to speak through the dead, like to a person’s late father, and “psychic” describes knowing aspects about a person, such as character traits or past occurrences. She said she cannot discern the future.

The skills simply aren’t present or absent in people. Kalis said she has developed them over time and continues to learn and improve.

When alone, she builds her abilities through meditating, journaling, candles and prayer. She follows teaching in a book by late author Sylvia Browne. And Kalis said she is a Christian but is more spiritual than religious. She doesn’t go to church.

“It’s through God that I get the spirits,” she said.

The eldest, Jessica Hendriks, said she has been in her mother’s readings but it has been difficult for her mother to get a good reading on her.

“It’s just hard for me because it scares the crap out of me,” Hendriks said.

However, she said she has witnessed her mother have good, meaningful readings for other people. She said she has seen some people crying after appearing to connect with the dead through her mother.

Kalis said she is particularly good at reading infants and toddlers.

“Kids are fresh from heaven,” she said.

She said she has used her skills to assist her children in decision-making and often could tell conditions of babies, such as being fussy or sick, without them being in the same room.

Kalis described a three-hour reading with a woman whose boyfriend had died before they split up. After the session, Kalis kept feeling the spirit by becoming panicky — one way they speak to her is by affecting emotions, she said — and interpreted it as the spirit wanting to continue. Finally, she said, “Let’s do this” and got up.

At that moment, a daughter, who was in the shower, screamed. She had felt the presence of a man’s hand on her shoulder, but nothing was there when she turned around.

She asked for a newspaper story to be written about her because she hopes to offer her services for no charge, just tips, to anyone. Also, she said she would like to find out if there are others in the region practicing similar psychic or medium skills. She knows there are some in the Twin Cities.

No license is needed to be a psychic or a medium. Appointments with Kalis can be made by calling 507-402-5149.

Since coming out to neighbors, she hasn’t run into skeptics, or at least no one has expressed skepticism to her. But she expects she will run into some.

“It goes with the territory,” she said.

Kalis cited the TV show about Theresa Caputo called “Long Island Medium.” Caputo said it doesn’t matter whether other people believe in psychic abilities because she can’t deny her own ability to read people.

One Caputo quotation is: “Sometimes I have to remind myself that I don’t have to do what everyone else is doing.”