Albert Lea’s Fourth of July festivities will include a little something for everyone. 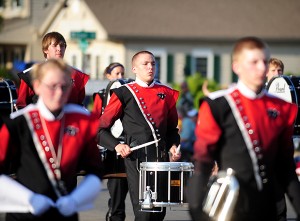 Events kick off with the third-annual Freedom Festival from 4 to 10 p.m. Thursday at Fountain Lake Park. The festival, put on by the local Beyond the Yellow Ribbon group, will include musical entertainment, free food and a memorial for all of the fallen soldiers in Minnesota since 9/11.

At 5 p.m., floats will line up at the Freeborn County Fairgrounds for the annual Third of July Parade. There are 14 more entries in this year’s parade than last year’s, such as Just for Kix, Albert Lea High School robotics, Erbert & Gerbert’s and the Sunset Saddle Club.

The parade itself is scheduled to begin at 6 p.m., and this year’s theme will be “Only in America.” This year’s parade marshal is Laura Lunde, president of the Lakes Foundation in Albert Lea.

The parade starts at the main entrance to the fairgrounds, travels down Bridge Avenue, turns west onto Fountain Street and ends at Central Park.

Susie Petersen of the Albert Lea Convention and Visitors Bureau said a new carnival will be in town called Cody Rides in the North Broadway parking lot. Rides will operate from 3 to 11 p.m. Thursday and noon to 11 p.m. Friday.

On Friday, the Bayside Ski Club will present its ski show at 2 p.m. with a pre-show at 1:30 p.m.  Snacks and beverages will be available for purchase at each show. Attendants are asked to bring their own chair or blanket and sunglasses. The show is free to the public, but donations are accepted.

The Albert Lea American Legion Post 56, The Old Car Co., KQAQ 970 AM and the Albert Lea Convention and Visitors Bureau will host a classic car show from 4 to 7 p.m. on Broadway and Fountain Street, Petersen said. Three People’s Choice Awards will be given, and door prizes will be given out throughout the show. Show cars should enter Fountain Street via Washington Avenue.

At about 8 p.m., the Albert Lea Community Band will assemble at the Fountain Lake Park gazebo to perform music for community members at the park.

Fireworks will follow from City Beach at dusk, usually around 10 p.m. Many people gaze at the fireworks from Fountain Lake Park or from boats on the water.

People can also view the fireworks from Albert Lea Lake during a pizza cruise on the Pelican Breeze II.

Northwood will have its annual Fourth of July festivities on Friday, Saturday and Sunday this year. A parade will start off the weekend at 11 a.m. on the Fourth of July followed by food, inflatables and Miss Northwood at the Worth County Fairgrounds. There will be a pool party that evening, along with a street dance, beer garden and fireworks. The festivities will continue on Saturday with the TUNE Run/Walk, a softball tournament and more, with the softball tournament carrying over into Sunday.

Bricelyn’s 57th annual Fourth of July celebration will be Saturday and Sunday and will feature activities for all ages.

The festival will be over two days instead of three as in past years.

On Saturday there will be a car, tractor and motorcycle show from noon to 4 p.m., with registration going from 9 a.m. to noon. The parade will begin at 1 p.m.

There will also be the Ron Sander Memorial Run, music in the park, a horse show, volleyball tournaments, a cribbage tournament, a chicken barbecue, among others.

In the park after the parade will be kids games, a petting zoo, and Sammy the balloon lady.

A variety show will be at 7:30 p.m. at Bricelyn Lutheran Church, and the Walking Eagle Band will be at the Bricelyn American Legion at 8 p.m.

Fireworks will begin at dusk.

The weekend will close Sunday with a firemen’s pancake breakfast at 7:30 a.m. and worship in the park at 10 a.m.

Schedule of Fourth of July activities in the Albert Lea area

• Registration for the car, tractor and motorcycle show, 9 a.m.-noon, Bricelyn