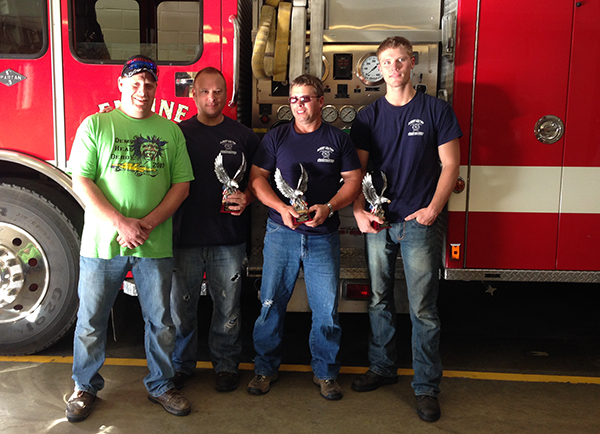 Three Albert Lea Township firefighters were recognized this week for their efforts in May to save the life of a man who suffered a heart attack in a demolition derby at the Freeborn County Fairgrounds.

Scott Kruse, of Stansfield, 44, on Monday presented awards to Mike Czaplewski, Tom Furland and Tim Brenegan, who performed chest compressions and other emergency measures at the derby.

“We really wanted to go down there and shake their hands of the firefighters that saved my life and let them know how much I appreciate what they did,” Kruse said.

He said he started feeling chest pains about 30 seconds after the green flag dropped at the beginning of his heat.

“I wasn’t sure what they were at the time, so against my better judgment I kept on going,” Kruse said.

After the derby was over — he finished second — he ended up going into a full cardiac arrest.

The firefighters were on duty at the derby.

Karl said the firefighters aimed to keep the oxygen flowing in Kruse, and his heart started beating again after he was taken to the Mayo Clinic Health System in Albert Lea. He was then taken to Rochester.

He said the fire department was especially proud to play a role in saving the life of a man as young as Kruse, who still could have many years to live.

Kruse said Paul Nielsen with Masters of Disaster, who puts on the derby, helped him set up the ceremony.

Kruse’s wife and children were also in attendance.