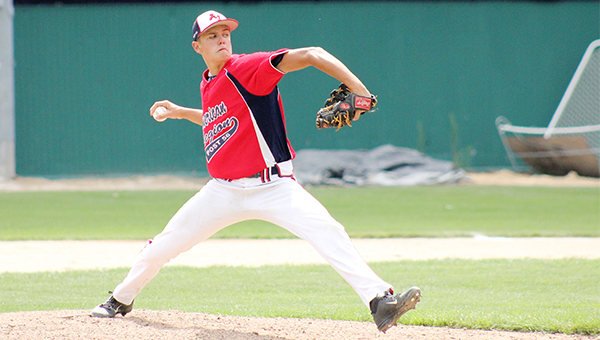 Tyler Steele of Albert Lea Legion Post 56 winds up to throw a pitch Saturday against Kasson in the consolation bracket of the District 1 tournament. Steele took the win. He pitched five innings, struck out three batters and gave up one walk and three hits. — Jacob Tellers/Albert Lea Tribune

WINONA — After what could have been a demoralizing one-run defeat against Winona, Albert Lea Legion Post 56 stayed alive with a pair of wins in the consolation bracket.

“This is what we had to do today,” said Post 56 coach Jay Enderson. “We had to pitch well. We had to swing well. We had to field the ball. We just had to give ourselves a chance to win.”

Against Kasson, Albert Lea got off to a fast start with three runs in the bottom of the first.

Johnathan Fleek had the first of his four RBIs with a line drive to center field to make the score 2-0. 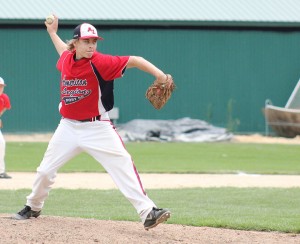 After gaining an early lead, the Post 56 cooled off, going scoreless the next three innings as Kasson edged back into the game with runs in the fourth and fifth.

In the fifth, a deep hit by Fleek bounced off the left field fence for an RBI double. Albert Lea added one run in the sixth, three in the seventh and four in the eighth to close out the game with nine runs in their last four innings.

The Tigers took advantage of multiple Kasson fielding errors while committing only one of their own.

“We hit the ball in some tough spots where they had a hard time making a play — where it would be a hard for anybody to make a play,” coach Enderson said.

Coach Enderson noticed that Steele’s arm slowed in the fifth and Muilenburg entered in relief.

“We felt that switch was good because it’s such a contrast between how Steele throws and how Muilenburg throws,” coach Enderson said. “Muilenburg was a good change, and once he got settled in he was pretty solid. I was confident after his first inning.”

At the top of the eighth, Muilenburg struck out Kasson’s first batter after a full count. He allowed only one hit and no runs in three innings.

Fleek led Albert Lea in batting. He was 4-for-5 with three runs and four RBIs. Makael Lunning went 3-for-4 with a walk and three RBIs.

“It was Chris’ best pitching all year,” said coach Enderson. “It was probably the best game of his career. Anytime someone can pitch nine innings this late in the season it is a huge accomplishment.”

Albert Lea played well in each phase of the game, coach Enderson said.

“It was our most complete game of the year,” he said. “We had excellent pitching and fielding and we pulled out enough hits for the win.”

Two double plays on defense helped the Tigers get out of tough situations without giving up any runs.

On offense, timely hitting made the difference as Albert Lea scored a single run in first, fourth, sixth and eighth innings.

“The Rochester pitching was really good,” coach Enderson said. “I have to give a lot of credit to them.”

Albert Lea only managed to get six hits, but they came at opportune times. A sacrifice hit by Parker Mullenbach and a sacrifice bunt by Fleek enabled runners to get into position to score.

Wyatt Paulson led Albert Lea on offense and was involved in all of its scoring plays. He went 1-for-2 with two runs and two RBIs.

Despite this win, Enderson was uncertain what Saturday would hold.

Because of a shortage of numbers, some players competed on both the Legion and VFW baseball teams.

The problem is that the Legion and VFW district playoffs are on the same weekend. Enderson said he has asked for the schedule to be tweaked to remove the conflicts, but that request was refused.

The American Legion playoffs are at Winona, and the VFW games are at Austin.