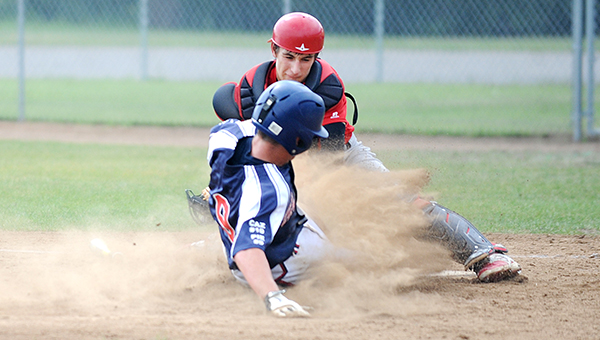 AUSTIN — Despite missing two of it’s playmakers, the Albert Lea VFW Post 447 baseball team had Rochester Mayo on its heels.

“We gave Mayo one heck of a run.” said Albert Lea coach Ed Bellrichard. “I had an infield I hadn’t had all year long, but they gave us a chance to win, and I’m proud of them,” 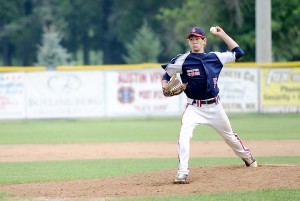 Albert Lea starters Parker Boyum and Jake Thompson were in Winona playing for the Legion squad, but Post 447 fought back from a one-run deficit to tie the game in the top of the seventh. However, Mayo scored a run in the bottom of the inning to win 9-8 Saturday in the District 1 consolation game at Austin and eliminate Albert Lea from the postseason.

Mason Hammer and Taylor Heavner led Post 447 at the plate.

Hammer was a home run away from hitting for the cycle, and the duo tied with a team-high two RBIs. Hammer was 3-for-4 with a single, double, triple and three runs scored. Heavner was 2-for-3 with a run scored and a walk.

“Up and down the lineup, several kids participated in the hitting parade,” Bellrichard said. “We had some opportunities even though we were playing with a limited team. We just needed to get that timely hit.”

Parker Mullenbach went the distance on the mound for Albert Lea. He struck out two batters and allowed nine hits, nine runs and a walk.

“He did a great job,” Bellrichard said. “We just couldn’t keep them from scoring.”

Earlier on Saturday, Albert Lea fell 11-1 in six innings against Austin in the first round of the district tournament.

“It was a one-hop off of his knee,” Bellrichard said. “Otherwise, he was the guy we wanted out there. He toughed it out a few more innings.”

Simon, Heavner and Sam Moyer each took the mound.

Mullenbach led Albert Lea at the plate with two hits.

The district tournament was double elimination, so Albert Lea finished the season with a 20-10 record.

Post 447 qualified for the four-team district tournament by going 3-0 in the division tournament.

“Overall, I’ve very pleased with how the season went,” Bellrichard said. “The kids worked hard. We know what it’s like to get to the final four. Next year’s team should compete really well.”