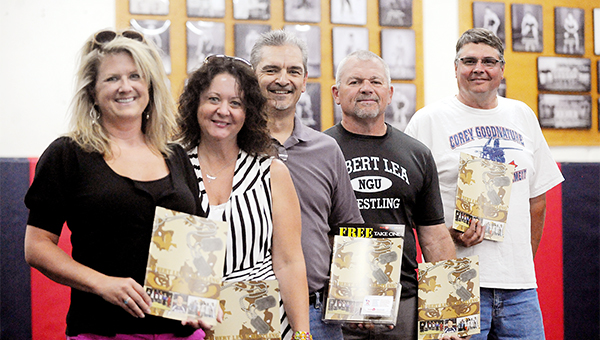 To bring that information to light, the Albert Lea wrestling booster club teamed up with Mark Arjes, the director of Youth 1st, and Kim Christianson from Church Offset Printing Inc. to produce a 52-page magazine that features photos and stats the program’s first year, 1940, to today. 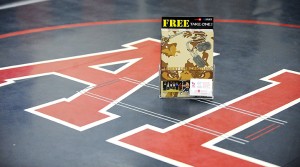 The magazine with history from the start of the Albert Lea wrestling program sits on a mat in the high school wrestling room. — Micah Bader/Albert Lea Tribune

“It took everybody working together to get all of it together, and she (Christianson) did a tremendous job of creating it,” Arjes said.

The majority of the information was produced by coaches and gleaned from plaques that line the walls of the wrestling room, a place that’s behind closed doors to most community members.

“Not many people see it except the wrestlers,” said Albert Lea coach Larry Goodnature. “It’s nice that now the public can see the tradition that we’ve carried on for many years.”

The magazine was published on June 27, and Christianson, the page designer at Church Offset Printing, said she’s already heard positive feedback from Gary Neist, a former state champion for the Tigers in 1964 who went on to wrestle in the 1972 Olympics, according to the magazine.

“He just thought it was the greatest thing,” she said. “It’s something I think they’ll hang on to.”

Along with the program’s history, the magazine also has content from last winter’s varsity, JV, ninth-grade, junior high and youth seasons.

“It’s going to be a nice thing for the past, present and future,” Goodnature said.

Brad Nelson, president of the booster club, said he hopes the publication will help keep participation numbers at a high level.

“It’s going to be a dynamic publicity tool to get older wrestlers interested in the program, plus draw young families in and show them what we have to offer,” he said. “Wrestling to me helps turn boys into young men really quick in a good way.”

The magazine, which is scheduled to be published annually, is available at 23 locations around Albert Lea, including the high school’s district office. It is free and paid for through advertising with local businesses and money from the booster club.

“We’re just seeing the surface of what people think about it,” Nelson said. “People who have a wrestling background and history are going to love looking at it.”