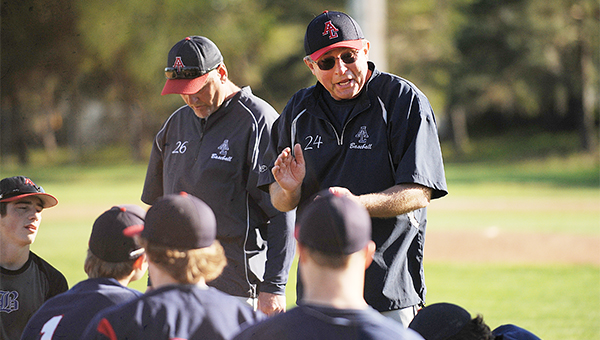 With one senior on the roster, Albert Lea coach Joe Sczublewski and the Tigers qualified for the Section 2AA finals.

After starting the season 4-13, Albert Lea finished the year on a 5-2 run. The only two losses were by a combined three runs against Glencoe-Silver Lake, a team that took third place at the Class AA state tournament.

Sczublewski is the Tribune’s All-Area baseball Coach of the Year in his 25th season as head coach at Albert Lea. 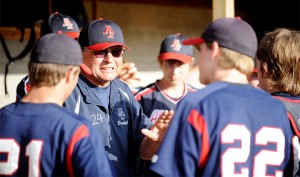 Albert Lea baseball coach Joe Sczublewski talks to his team outside the dugout in during the Subsection 2AA South semifinals on May 27 against Tri-City United at Mongomery. The Tigers won 3-2 in eight innings. Micah Bader/Albert Lea Tribune

Albert Lea began the season with an 18-1 loss at Owatonna but rebounded by winning four of its next six games, including a 2-1 victory on April 25 against Winona in eight innings at Hayek Field.

The Tigers continued the season with a 10-game losing streak. However, things looked up for Albert Lea late in the streak as it lost the last two games by one run each. The last game of the streak was a 6-5 home loss against Big Nine champion Rochester John Marshall.

After snapping the streak with a 17-0 win against NRHEG, the Tigers cruised to a subsection title with an 8-3 win over Waseca, a 3-2 win at Tri-City United and an 8-6 win against Faribault Academies. Albert Lea moved to the consolation bracket after a 5-4 loss against Glencoe-Silver Lake but rebounded by shutting out Holy Family Catholic 4-0 to get another shot at Glencoe-Silver Lake.

Q: With a win on May 29 against Faribault Academies, your team won the Subsection 2AA South title. Is that something you’re looking to build on next year?

A: Definitely. It was a great confidence-builder for the kids and made them realize they are capable of going a lot further next year if they work hard at it and keep improving. If they can pick it up next spring where they left off and everyone comes back healthy, we feel like we are certainly capable of improving upon our section runner-up status.

Q: How much do you think facing the tough pitching in the Big Nine Conference helped you in the postseason?

A: The Big Nine is arguably the toughest outstate conference for baseball in the state, so you really have to play well in every game or else you will get beat up on. It certainly made us a better team for our postseason run.

Q: Despite all of the success in the section tournament, the regular season had a 10-game losing streak. What did you tell the guys to keep their spirits up?

A: Well, a big part of that was Johnathan Fleek coming down with a sore elbow, which took him off the mound for a two-week stretch. He was able to play at shortstop, but we didn’t want to jeopardize the chance of him being able to heal up properly to be ready for the playoffs, so we had to bite the bullet hoping he would be ready to help us on a postseason run as a pitcher, and he did. It was frustrating to lose 10 in a row, but a lot of the games were close where a couple of plays here or there determined the outcome. We knew we weren’t that far away from turning it around come playoffs. We had some games where we were starting five to six first-year sophomores, so they had to get a taste of playing against older more experienced kids. You need to keep stressing basic fundamentals that you believe in and convey that hard work will eventually pay off.

Q: Your pitching rotation featured a few different styles, do you think that helped keep opponents off balance at the plate?

A: You use what you have available. Everyone has their strengths and weaknesses, and you just need to try to put them in situations where they can be successful and develop some confidence in their abilities.

Q: The team really came together during the section tournament. Where did you see the team grow the most?

A: I thought our team bonded well. Even if someone wasn’t having a good day on the field, they kept their heads up and stayed positive and were super supportive of their teammates. That wasn’t always the case in the earlier part of the season as some kids might dwell on the lack of success they had as an individual in a game and might bring the attitude of the team down. The coaching staff felt all season long that our strength of the team was our defensive play, and if we just limited our opponents to only three outs per inning, we would be able to be competitive with anyone. Except for a bad inning in each of the Glencoe-Silver Lake losses, we were able to play strong defense throughout the sections.

Q: What was the highlight of the season for you?

A: Coming back from a tough loss in the winners bracket finals to Glencoe-Silver Lake and shutting out a highly-rated Holy Family Catholic team in the losers bracket finals 4-0.  Everyone was so energized. Fleek threw a great game, and we had several super plays in the field along with some timely hitting.

A: Not really. Over time you deal with a lot of different coaches you come in contact with both as a player and as a coach. You pick up what you feel is important and right for you from others. Your coaching style is also based on the talent and the personalities of the personnel of which you are working with each year.

Q: What are your plans for the team to work in the offseason? Any individual/team camps?

A: Most kids are continuing to play in summer ball either on the VFW or Legion teams. Actually, seven kids play on both teams.

Q: With your team returning everyone except All-Area  Player of the Year Johnathan Fleek, what is your goal for next season?

A: I really believe we have the potential to be a contender in the Big Nine race next season if our pitching staff can become a little more consistent. With the addition of Northfield and Red Wing next year, the conference schedule will be a single game against everybody rather than a double round-robin schedule as it always has been. That might affect how things shake out at the end. I think all of the returning players realize they have the potential to advance beyond where they finished this season, but it won’t happen unless they keep improving in all parts of the game. If kids don’t stay hungry to improve, others will pass them — whether it is the opposition or a younger teammate looking for playing time. I am anxious to see some of our talented younger players provide some possible competition for playing time and provide the added depth that we didn’t have this season since we only had one senior.

Q: Are you a teacher at ALHS? If not, what did you teach in the past?

A: I retired a few years ago from teaching, but I still substitute teach and teach drivers education. I taught social studies — history, economics, geography, psychology and sociology — before retiring.

Q: What would you like to say about your coaching staff?

A: Our staff includes Jay Enderson and Derek Fleek, varsity assistant coaches; Nate Wilson, JV coach; and Paul Durbahn, ninth-grade coach. They are a dedicated group that is consistent in teaching fundamentals and making baseball fun for the kids. They enjoy coaching baseball and are as hard working of a staff as there is in the Big Nine Conference.