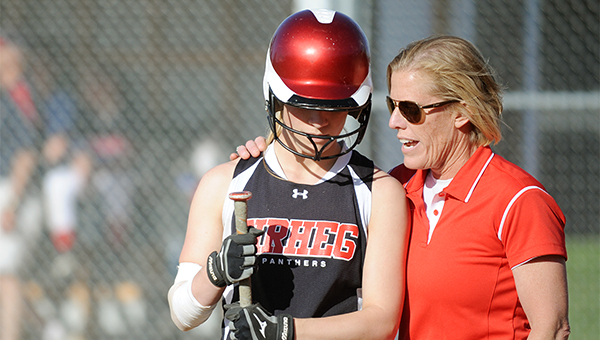 NRHEG coach Wendy Schultz, right, talks to Anna Stork before she walked to the batter’s box during the Subsection 2AA South semifinals on May 22 against Albert Lea at New Richland. The Panthers won 4-3. — Micah Bader/Albert Lea Tribune

NRHEG finished with a 14-8 record and a 9-1 mark in the Gopher Conference. Half of the Panthers’ losses were by one run.

Schultz is the Tribune’s All-Area softball Coach of the Year. 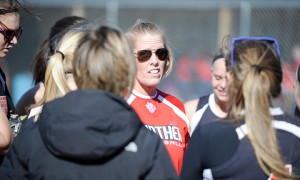 NRHEG coach Wendy Schultz talks to her team during a stoppage in play against United South Central on April 10 in the Panthers’ season opener. NRHEG won the game 10-0. — Micah Bader/Albert Lea Tribune

The Panthers began the season 3-3 with each loss by one run and wins by a combined score of 27-0. After a 12-11 home loss against Belle Plaine, NRHEG went on to win seven straight games. During that streak, the Panthers won four shutouts, including a 3-0 victory at Maple River on May 9 and a 5-0 win against New York Mills the next day at the Hayfield tournament.

Maple River ended up defeating NRHEG 15-0 in five innings in the subsection finals, and New York Mills went on to qualify for the Class A state tournament where it won the consolation bracket after a loss in the quarterfinals to eventual state champion New Ulm Cathedral.

NRHEG had consistent pitching from Schultz’s daughter, Jade, as she pitched every inning of every game this season. In 159 innings, she faced 693 batters. She had 205 strikeouts and gave up 116 hits, 80 runs, 33 earned runs and 55 walks.

At the plate, NRHEG’s Anna Stork led the area with 37 hits, and Jade was second with 35.

Q: What will you remember most from this season?

A: It’s hard to pick specific games, but a memorable thing from this year is how hard the girls have worked. Every single day when I came to practice, the girls were ready and stretched. As a coach, that’s something you appreciate, when you have kids who are responsible. The Albert Lea game (in the Section 2AA South semifinals) was pretty fun. We trailed most of the game and ended up winning 4-3. It nice that Jade was able to strike out the last two batters.

Q: Do you think the four one-run games during the regular season made you stronger for the postseason?

A: I think it did. There were so many times the girls were put in situations where it was close and we needed to come up with a big hit. They were definitely used to it. It probably helped in the game against Albert Lea.

Q: Where did you see the team grow the most?

A: One thing we really tried to work on was baserunning. At the beginning of the season, we were making mental mistakes we maybe shouldn’t have. It’s always fun to keep the defense on their toes, and we had a couple, three players who would focus on baserunning. Jade and Hannah were very smart as to getting as far off the base as they could, and if the throw wasn’t right they’d be off to the next base.

Q: Jade Schultz led the area with an ERA of 1.45. How important was it to have consistent pitching?

A: She is a mentally strong player, and she always gave us a chance to be in the game. She threw hard and made a lot of tough plays. When you can have someone on the mound who only gives up one run a game, you have a good chance to win.

A: I look back at some of the coaches I had growing up in high school. I take a little bit from everyone that I’ve been coached by. You try to make it your own thing. The bottom line is to work hard. Wins and losses don’t matter as long as everybody’s been giving 100 percent and working hard in the offseason.

Q: What are your plans for the team to work in the offseason?

A: We continued this summer with seven teams.

Q: How important is it for the returning kids to play softball during the summer? Is there a U18 team?

A: I almost wish that kids could be kids and nobody would do any sports in the summer. That’s definitely not the way it is now days. If you don’t do it, you’ll fall behind because everyone else is. We encourage our kids to play, but they don’t have to. Vacation time with their families — that is important, too.

Q: With your team returning everyone except co-All-Area softball Players of the Year Jade Schultz and Hannah Lundberg, what is your goal for next season?

A: I won’t be coaching next year, so I’ll be a spectator. I don’t know who the coach will be next year. I decided to step down because my son Jack will be in 10th grade, and I wanted to be able to see his games.

Q: What would you like to say about your coaching staff?

A: Jamie Radtke has been coaching our JV and B-squad teams, and she is very knowledgeable. Onika Peterson volunteered and helped us out. Nate Jensen and Jen Hatton did a great job with the junior high team. I was very fortunate to have such a great coaching staff.