The funeral service for Allen R. Myrom, of Albert Lea will be held at 2:30 p.m. on Thursday at Thorne Crest Retirement Community, 1201 Garfield Ave. The Rev. Tom Biatek and Chaplain Julie Schaffer will officiate. Interment will be in Graceland Cemetery. Military honors will be accorded by Albert Lea veteran’s organizations. Friends may visit from 2 p.m. until the time of the service at Thorne Crest. Memorials preferred to Thorne Crest, the Albert Lea American Legion Club, or the Smithsonian. 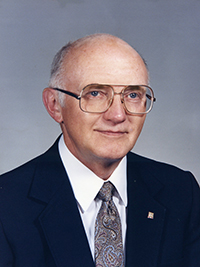 Allen and Wanda loved to travel, which they did extensively, to all parts of the U.S. and Europe. He also loved gardening, growing the most beautiful roses.

He is survived by sisters-in-law and brother-in-law Mildred Myrom, Shirley Schroer and William (Merlene) Keeler; numerous nieces, nephews, and many friends. He was preceded in death by his wife, Wanda Claire Myrom; parents, Casper and Fern; mother-in-law, Edith Mowery Keeler; and siblings, Russ, Herbert, Carl and Mary.