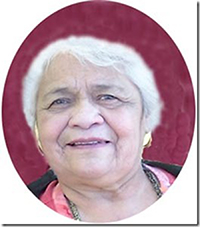 The funeral service for Antonia “Toni” Linda Nelson will be at 1 p.m. Friday at Seventh Day Adventist Church, Highway 56, 410 SW Third Ave. in Dodge Center. Interment will be in Riverside Cemetery in Dodge Center.

Antonia Linda was born on March 12, 1943, the daughter of Alfredo and Gregoria (Luna) Cruz in Minnesota Lake.

Toni attended St. Theodore Catholic School in Albert Lea. Toni was united in marriage to Larry Nelson on March 16, 1984, in Northwood. She worked at various jobs over the years in Albert Lea and Dodge Center. Toni enjoyed cooking, dancing, crafts and was known for her popcorn balls. She enjoyed helping other people and was active in the Hispanic community.

She was preceded in death by her parents, one brother and three sisters.

Visitation will be from 4 to 7 p.m. Thursday at Czaplewski Family Funeral Home, 25 South St. SW in Dodge Center and one hour before the service at the church on Friday.