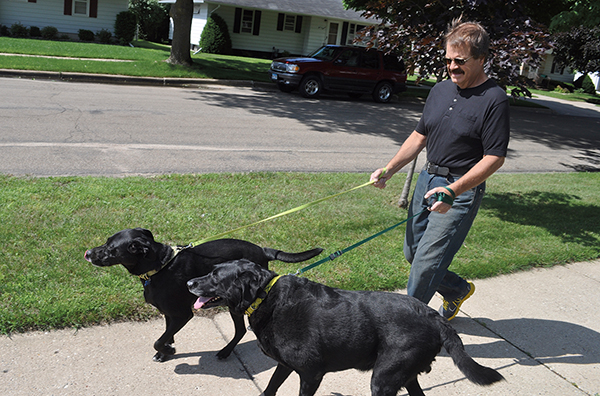 Austin Mayor Tom Stiehm has lost more than 100 pounds since August after he decided to live a more healthy lifestyle. He regularly goes on walks with his dogs Harper and Annie. – Trey Mewes/Albert Lea Tribune

AUSTIN — Austin’s outgoing mayor can be found at every city event and celebration throughout the year, whether to read a proclamation or support local organizations. Yet Tom Stiehm didn’t feel very outgoing last August. 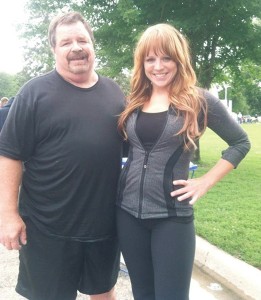 Mayor Tom Stiehm and his daughter, Christine, pose for a photo before Stiehm lost more than 100 pounds. – Provided

He took a picture with his daughter, Christine Stiehm, after a dunk tank event and didn’t like what he saw.

He had gained dozens of pounds over the past 24 years, but he didn’t realize how much it had affected him until he saw himself in the photo at about 270 pounds.

The end result of his executive decision: a lot of walks, much more fresh food and lean meats and a new lease on life.

Nowadays, more than 100 pounds lighter, 62-year-old Tom is close to the end of his goal to weigh between 155 and 160 pounds. He’s feeling more fit every day and his decision to live healthier is paying off.

“I’ve lost significant amounts of weight before, but nothing like this,” he said.

Tom made his diet change as permanent as possible when he decided to eat more fresh fruits and vegetables and lean meats. That also meant an end to late-night snack runs and stops at the Dairy Queen and other shops after work. Tom’s wardrobe also helped motivate him.

“You just enjoy dressing better,” he said. “I’ve weighed this before, so I have all the clothes. Now, every time I go down a size, I just wear clothes I haven’t worn for 15 years.” 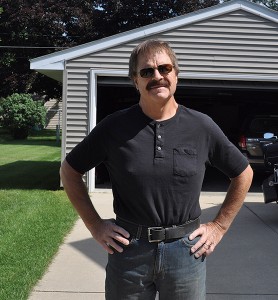 Mayor Tom Stiehm has lost more than 100 pounds since he decided to lose weight in August. – Trey Mewes/Albert Lea Tribune

One of his favorite new habits is his long walks with his dogs Annie and Harper. Together, the three travel at least three to four miles every day, which Tom said was a habit he picked up in the Marines, which always made everyone run three miles at the start of their training “no matter what shape you’re in.”

Tom has struggled with his weight for years, though he hasn’t weighed close to 160 pounds in more than 20 years. He also beat back prostate cancer several years ago, which was an added incentive for him to lose weight. Yet his healthy choices have paid off: He used to take four medications for his blood pressure, but doctors have weaned him off his prescriptions since he went in for a checkup in January.

Tom’s wife, Sarah, has noticed the change as well. She’s joined Tom in his diet plans and has lost more than 25 pounds herself and “feels more like 40” nowadays.

Tom knows a diet change is hard work and it’s always tough to keep a diet going. That’s why he calls his weight loss a “lifestyle change,” as he doesn’t plan to go back to eating so much junk — though he and his wife do treat themselves about once a week.

He’s more concerned with maintaining his weight in the future. He plans to work out during the winter and he may even attend one of his daughter’s yoga classes at the Yoga Studio of Austin. He’s happy to set an example for Austin residents, but he likes setting an example for his extended family more, as several of his siblings have started diets of their own since he began to lose weight.

For now, he enjoys being back down to about 160 pounds, though he doesn’t quite know what his future fitness plans will hold.