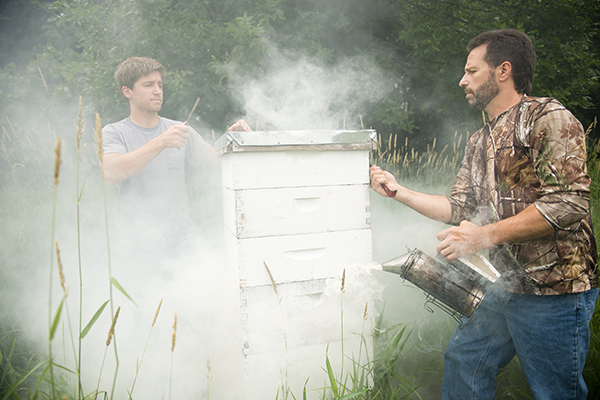 Dan Studier, right, keeps a smoker going while he and his son, Drew, take the cap off of one of their 12 hives. The smoker keeps the bees calmer so that they’re less likely to sting. – Colleen Harrison/Albert Lea Tribune

GLENVILLE — Ask Dan Studier why he’s a beekeeper, and he’ll tell you it’s in his blood.

Beekeeping is a trade that’s been passed down throughout the Studier family. It started with Dan’s grandfather, Emil, then was passed onto Dan’s father, Rudy, and Uncle Herb, to Dan and his brother, Tim, and continues today with Dan’s son, Drew.

Rudy and Herb Studier started the family into the commercial beekeeping business with Shell Rock Honey Farms in 1947. At Shell Rock’s peak, it had around 5,000 hives in Minnesota, Iowa, Georgia and Florida and distributed 55-gallon drums to packing companies. About 99 percent of the honey was bottled by those packing companies, with the remainder being bottled by the family and sold at a roadside stand in Glenville.

Dan and Tim grew up helping with the business, and Dan said he went into it full-time after graduating from high school in 1978. He stayed with it until leaving in 1994, and his brother followed suit a few years later.

According to Dan, the only way to make money off of bees in the northern part of the country is through honey production. Down South, other options like raising queen bees and offering pollination services provide other revenue sources. He said Tim tried taking bees down South for a while, but different quarantines brought about by the increase in mite and beetle problems made it impossible for him to move bees.

Dan said the challenges the industry was facing became too much, along with the expenses. He was working a full-time job along with full-time beekeeping and wasn’t seeing a profit. Floral sources that the bees fed off of were being eradicated thanks to chemicals, mites and beetles were posing a problem, an intestinal disease called nosema was becoming more common and colony collapse disorder was emptying hives in the offseason. The honey being produced became less and less, while expenses grew. Dan left the commercial beekeeping business and had no intentions of ever returning.

“It was frustrating, having two full-time jobs and no money. I was spinning my wheels,” he said.

It was Dan’s wife of 10 years, Cathy, who suggested he get back into beekeeping, at least as a hobby. That was about six years ago, and Dan has no plans of ever going commercial again. Now working full time in the shipping department at Ventura Foods in Albert Lea, he likes being able to keep bees and not have to depend on them as a source of income.

“I didn’t understand how much I enjoyed it before,” Dan said. “I didn’t have the time to enjoy it before. There’s no pressure to make it work now … It’s kind of an art.”

Shortly after getting back into beekeeping, Dan’s son, Drew, joined up with him.

“I grew up watching my dad, uncles, cousins,” Drew said, “I remember going to the bee yards with them.”

“It’s something for us to do together,” said Dan. “Some fathers and sons go hunting together, we keep bees.”

Drew, a taxidermist at Tom’s Taxidermy in Clarks Grove, shares his father’s sentiments about beekeeping staying a hobby and not becoming anything more.

Both father and son believe there are too many hurdles for the industry at the moment, and aren’t sure that experts even know what to do to fix things.

“I hope they figure it out. It sounds like it’s reached national attention,” Dan said. “I’d like to see the business grow, but I’m not going to put any more money into it until the experts figure it out.”

“It’s frustrating when you want to have healthy, successful bees and have it not come through,” added Drew.

Dan said that he used to be able to keep bees in Minnesota year round. After the harvest season, which is typically six to eight weeks long, he would leave enough honey in the hive for bees to feed off of, and they would essentially hibernate for the winter. Colony collapse disorder and nosema disease have each put a stop to that though, he said. The disorder makes the bees abscond and disappear from the hive. Nosema takes over the bees’ intestines, killing them off as they attempt to hibernate.

Because of those threats, the Studiers buy new hives each year. Dan said that the bee packages are sold by the pound and said he and Drew buy 12 three-pound packages at about $100 each.

The trick to beekeeping, according to Dan and Drew, is knowing when to harvest. They harvest from their hives about three times over the course of one season. Harvesting in late spring or early fall should be avoided. Bees can make honey up to six months; it’s just not all usable, said Drew. He said you have to time it right, right in “the sweet spot” over the middle of summer.

The father-son duo then use a four-frame extractor to take the honey out of the hives and hand-crank it in a 100-gallon stainless steel drum, before bottling it. They sell the honey at the Albert Lea Farmers Market and from Dan’s home off of Highway 65 in Glenville.

Dan prides himself on the fact that their bees are not treated with any kind of chemicals, and that they seek out a certain kind of floral source for the honey they put into jars. They avoid goldenrod and thistle as sources, and instead hold out for sources like sweet clover and white dutch. They house their hives near a wildlife refuge, and away from farmland so that there’s no chemical contamination.

For those looking into beekeeping as a potential hobby, both Drew and Dan suggest knowing what you’re getting into. Dan said the best way to learn is to find someone who’s already keeping bees and to job-shadow them.

“Hands-on experience is the best experience,” he said.

Ask the two men if they’ve ever gotten stung, and they’ll both laugh before saying yes. They don’t typically get stung much anymore and don’t usually wear protective wear, but they said there’s definitely a learning experience that comes along when you first start handling bees. 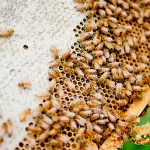 Father and son team Dan and Drew Studier harvest honey from their 12 hives that they keep in rural Glenville. They sell the honey at local farmers markets and from Dan’s Glenville home. – Colleen Harrison/Albert Lea Tribune 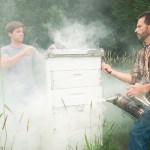 Dan Studier, right, keeps a smoker going while he and his son, Drew, take the cap off of one of their 12 hives. The smoker keeps the bees calmer so that they’re less likely to sting. – Colleen Harrison/Albert Lea Tribune 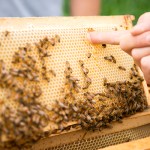 Dan Studier points out the honey that the bees in one of his hives have produced. Studier and his son, Drew, said they typically harvest honey from their 12 hives about three times each season, depending on the conditions. – Colleen Harrison/Albert Lea Tribune 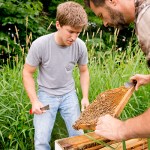 Dan Studier, right, and his son, Drew, check the frames of one of their 12 beehives in Glenville. Beekeeping has been in the Studier family for generations, but Drew and Dan started beekeeping together as a hobby about six years ago. – Colleen Harrison/Albert Lea Tribune 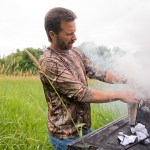 Dan Studier gets a smoker ready before checking on his beehives in Glenville. Studier has been a beekeeper since he was a child and learned the trade from his father, Rudy Studier. The family ran a commercial beekeeping business, Shell Rock Honey Farms, until the mid ‘90s. Studier still sells honey to local farmers markets under the same name. – Colleen Harrison/Albert Lea Tribune 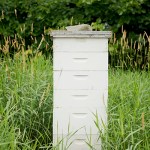 Dan and Drew Studier have 12 beehives they harvest honey from in rural Glenville. The trade goes back in the family for generations, starting with Dan’s grandfaher, Emil Studier. – Colleen Harrison/Albert Lea Tribune 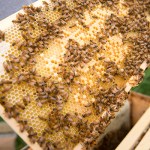 Bees cover a frame from one of Dan and Drew Studier’s beehives. The filled-in sections in the middle of the frame are eggs. – Colleen Harrison/Albert Lea Tribune 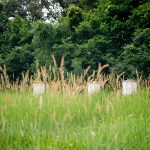 Dan and Drew Studier have 12 beehives in rural Glenville that they harvest honey from. – Colleen Harrison/Albert Lea Tribune 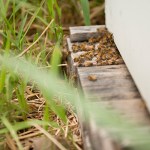 Bees crawl out from under one of the Studier’s 12 beehives in Glenville. – Colleen Harrison/Albert Lea Tribune 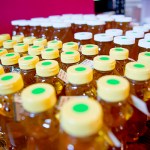 The Studiers harvest and bottle honey from their 12 beehives in Glenville, and then sell the honey at local farmers markets and from Dan Studier’s home in Glenville. – Colleen Harrison/Albert Lea Tribune