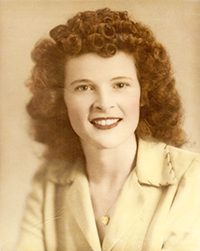 Betty was born in Ida Grove, Iowa, to the late John and Priscilla Hargis. She graduated from Albert Lea Senior High School in 1943. Upon graduating she moved to Seattle to work as “Rosie the Riveter” in an airplane assembly factory until the end of World War II.

Her faith was an important part of her life as she was a member of Central Christian Church for over 32 years. She also loved spending time with her family.

The viewing will take place from 10 to 11 a.m. Thursday followed by a funeral service at 11 a.m. at Hiers-Baxley Funeral Services, 910 E. Silver Springs Blvd. in Ocala, with the Rev. Chuck DeBardeleben of CenterPoint Church officiating. A private family interment will take place at the conclusion of the service. Memorial gifts may be sent in care of Amanda Tice, 8590 SW 66th Terrace, Ocala, FL, 34476.

Arrangements are with Hiers-Baxley Funeral Services.