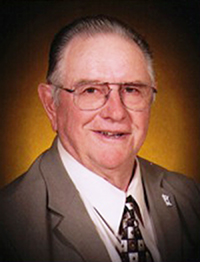 Together Bill and Arlene operated their 376 acre grain and livestock farm in Freeborn County until they retired from farming in 1994. Although retired, they have been active in the maintenance of their land resources through wildlife wetland development, tree plantings, retaining original oak savannah and CRP acres all as part of their personal mission to leave something for future generations.

Bill was born and raised in Alden. He married Arlene Monson on April 2, 1950, at Winnebago Lutheran Church in Lake Mills. Bill was a hard worker and good provider all of his life, however, he insisted that his family know there is more to life than chores. Vacations to Lake Kabatogama, the north shore of Lake Superior, Yellowstone during the ’59 earthquake, the Falls, Arizona, Colorado, the Rockies, Canada and 11 trips to Alaska are cherished trips for Bill, Arlene and the family. His sense of humor, comical stories and songs will live on with family and friends. Bill loved to visit with everyone he met.

A pinnacle decade in his life was the lawsuit cited as Freeborn County v. Bryson. After two trips to the Minnesota State Supreme Court, Bill and Arlene stopped a road from going through a marsh they had purchased and enhanced for wildlife. This landmark case, tried under the new Minnesota Environmental Rights Acts, highlighted the significance of protecting wetlands and brought national recognition to this dairy farmer and his nurse wife.

Bill has devoted much time and effort to the conservation of the natural resources and the protection of the environment over the years. These passions began at Buckeye Country School, where his teacher would take the class for nature walks and developed into a lifelong mission. A childhood interest in the great outdoors molded his character for life. His thirst for knowledge and keen memory enhanced his public speaking presence. He was an inspired speaker which led him to testify for conservation issues locally and nationally. His family will always remember his determination to take a stand for what he believed was right.

The Brysons were avid birdwatchers and active in many conservation groups including the national and local Audubon Society, Minnesota Ornithologist Union, Sierra Club, Nature Conservancy and Parks and Trails. Bill served on the Freeborn County Soil and Water Conservation District Board, Minnesota Pollution Control Agency Citizen Board and Forestry Committee. Bill has received countless awards and recognition for his knowledge and dedication for conservation and preservation of the environment and water resources.

Funeral services will be at 2 p.m. Monday at Redeemer Lutheran Church in Alden. Visitation will be from 4 to 7 p.m. Sunday at Bonnerup Funeral Service in Albert Lea and one hour prior at the church.