Bomb squad called in for explosive near Bricelyn

BRICELYN — A person mowing the grass at Legion Park near Bricelyn found an explosive device Wednesday night, according to the Faribault County Sheriff’s Office. 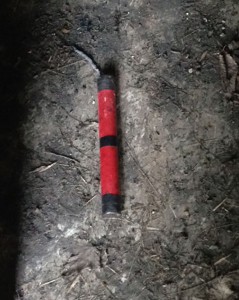 This explosive was found Wednesday night in an outdoor restroom at Legion Park near Bricelyn. — Provided

The Bloomington Bomb Squad, called in to investigate, detonated the bomb at the park.

Authorities do not know how long the explosive had been in the park or how it got there.

A news release states the Sheriff’s Office was alerted to the explosive at about 7 p.m. after receiving a call of what appeared to be a stick of dynamite in an outdoor restroom at the park.

Deputies took photos of the explosive and sent them to the bomb squad for examination. After determining that the object appeared to be real and dangerous, they decided to come down to Bricelyn and destroy it.

Two members of the bomb squad arrived at about 10:30 p.m. They removed the explosive from the restroom, placed it outside and detonated it, the release stated.

No other items were found in the park.

Anyone with information about the incident should contact the Sheriff’s Office at 507-526-5148.