Some longtime Albert Leans might recall the story of Della Moorehead True, who poisoned and killed two of her seven children while living in the city from 1938 to 1943. 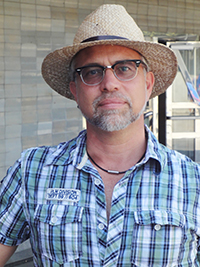 She poisoned them by putting strychnine in their milk, according to newspaper accounts. She was convicted in 1943 and sent to prison.

She was the great aunt of Iowa author and historian Michael Luick-Thrams, who has dug up the 400-year history of his family in North America including the story of how Della Moorehead True killed Ardith and Merle True for Luick-Thrams’ soon-to-be-published book “Oceans of Darkness, Oceans of Light: Our Family’s Troubles and Treasures in the New World.”

From the granny who pilfered her grandkids’ doll clothes to butchers turned frontier lawmen to philandering farmers, the book recounts one family’s improbable journeys from Europe to the American Midwest and back. Along the way, they have found both disaster and redemption.

“It seems the right time to tell these stories” Luick-Thrams says. “Our country is at a crossroads. Looking back to see where we’ve been, how we got to where we are and informed trajectories as to where we might be headed have seldom been so important as they are now.”

To be released first as an e-book this autumn titled “Roots of Darkness,” over the next winter Luick-Thrams will write “Rays of Light,” the second volume of his two-part series about the diverse families that eventually formed the one in which the author grew up on a farm between Mason City and Clear Lake in the 1960s and ’70s. A printed double-band version will be released in spring 2015, complete with almost a hundred photos and individuals’ documents.

Luick-Thrams will share stories in at least three locations: