Cecil “Bud” Varner, 84, of Hollandale died Monday, July 28, 2014, at Mayo Clinic Health System in Rochester. Funeral services for Bud will be at 10:30 a.m. Saturday at Bonnerup Funeral Service with the Rev. Roger Davies officiating. There will be visitation from 5 to 8 p.m. today at Bonnerup Funeral Service in Albert Lea and one hour prior to the service on Saturday. Interment will be in Hollandale Cemetery at a later date. Memorials are preferred to Hollandale Fire Department First Responders, Hollandale Cemetery Association or donor’s choice. 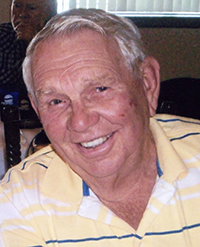 Bud was born Feb. 22, 1930, at home in Hollandale, the son of Russell and Lola (Keck) Varner. Bud married Barbara Kron on Jan. 20, 1951, in Albert Lea. He was a graduate of Albert Lea High School class of 1949. He was a farmer, growing a variety of crops including potatoes, and enjoyed coffee twice a day with the “fannie” farmers.

Bud was a member at Hollandale Conservative Church, Sons of Norway, Board of HMA and served on the church and cemetery boards. He was very involved in the Maple Island Ball Park, playing fast-pitch softball. He was his own Macgyver, proving himself to be a handy wittler and inventive iron worker. He was also an avid reader and gardener. In his retirement, he and Barbara spent 17 years wintering in Arizona. Bud will be remembered for his hard work ethic and genuinely nice personality.