Despite the rain, Hayward Days rolls on 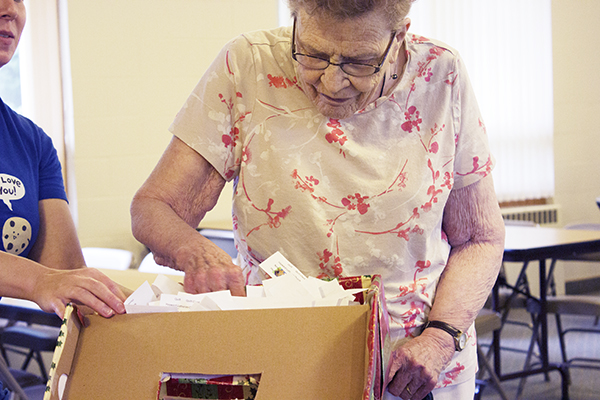 HAYWARD — The small town spirit of Hayward is evident in Hayward Days, its annual town festival.

Last year, Hayward Days was reduced to one day of events. This year it was bumped back up to two days of fun including things like the April Sorensen Memorial Half Marathon and mud bog races.

However, there are many other things that go on during this two-day celebration, such as a long-standing bake sale and raffle at Hayward Lutheran Church and a car and motorcycle show, which were both on Saturday morning.

The bake sale and raffle has been going on for more than 20 years, according to Pat Frydenlund, co-president of Hayward Lutheran Church’s branch of Women of the Evangelical Church of America.

The women of WELCA brought many things to sell at the bake sale, including mini Bundt cakes, cookies, brunkake, banana bread and even farm fresh eggs.

Frydenlund also said that WELCA sold rolls and coffee before the raffle as well.

Entrants to the raffle could win one of two prizes. The first was a quilt chest made by Lou Larson, one of the founders of Lou-Rich.

The second was a nine patch with an attitude quilt made by the late Margaret Ellsworth of Austin. The quilt was donated by Carolyn Matson of the Calico Hutch, Hayward’s quilt shop.

Frydenlund said that a quilt is usually raffled, but afghans have been raffled off in the past.

Bev Noland won the quilt in the raffle, and Harriet Skaar, a 90-year-old woman, won the quilt chest. LaVonne Williams, last year’s raffle winner, drew the names from the box.

The money raised from selling the bake sale goods and raffle tickets goes to WELCA’s outreach, Frydenlund said. She said that the group raised about $1,500 last year and has sent donations to Youth for Christ, the food shelf and the Salvation Army.

She also explained that WELCA donates quilts to quilt auctions and the Red Cross. If WELCA ends up making a good amount of funds from the bake sale and raffle, about one third of it is put back into the church general fund, Frydenlund said.

WELCA’s efforts with the bake sale and raffle help them purchase furnishings for the church and to keep the church updated.

Frydenlund said this event is much more than a bake sale and raffle. She said people who used to live in Hayward come back for the festivities and reconnect with old friends sitting around a table with some coffee and bake sale goods.

One woman brought a stack of photographs from the 1920s and was asking around if anyone knew who was in the pictures. Frydenlund said it’s always fun to see the community come together during Hayward Days.

Struggling with the rain

The car show is relatively new to Hayward Days compared to the bake sale and raffle but is still important to the festivities, said Nick Semple, the Hayward Booster Club president.

This is the fourth year of the car show, which began accepting motorcycles this year as well. Semple said that last year the show was rained out, but the second year of the show was great and many cars showed up.

This year’s car show was a little rainy, but classic cars were still filling up the show area in Hayward on Front Street.

Semple said if the weather was better, he would expect 80 cars to show up. Due to the rain, he was expecting about 40 this year.

Many prizes were given out at the car show, including everything from oil changes to frozen pizzas.

7Up Bottling and Becker Auto Sales in Hayward are the show’s two main sponsors, Semple said.

The rain last year hurt the show, Semple said. The car and motorcycle show makes money for the booster club, and that money would go towards beautification of Hayward. However, Semple said that small town festivals can’t make it if the weather doesn’t cooperate.

“The rain bums everything out,” he said. 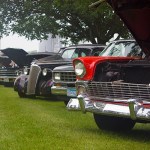 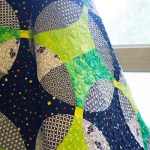 This colorful quilt was donated to the Hayward Lutheran Church raffle by Carolyn Matson of the Calico Hutch. It was raffled on Saturday during Hayward Days. – Hannah Dillon/Albert Lea Tribune 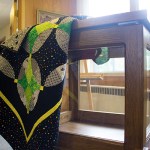 A quilt made by the late Margaret Ellsworth of Austin and a quilt chest made by Lou Larson of Lou-Rich were the two items raffled during Hayward Days at Hayward Lutheran Church. – Hannah Dillon/Albert Lea Tribune 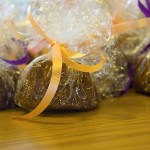 Many items were for sale at the bake sale at Hayward Lutheran Church during Hayward Days, including miniature Bundt cakes. – Hannah Dillon/Albert Lea Tribune 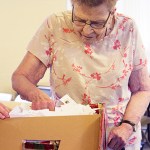 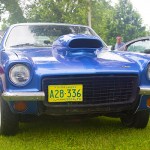 A striking blue 1972 Chevy Vega was one of the first cars at the fourth annual Hayward Days car show. – Hannah Dillon/Albert Lea Tribune 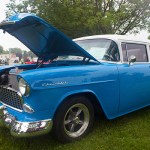 A cheerful blue and white 1955 Chevy 210 was one of the many classic cars at the Hayward Days car show. – Hannah Dillon/Albert Lea Tribune