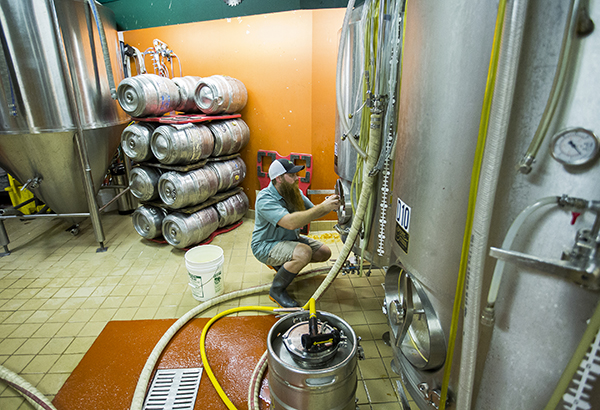 DULUTH — When a new brew pub opens in Endion Station in Canal Park this week, the brewpub in the thriving tourist district will mark the city’s latest step in its evolution. 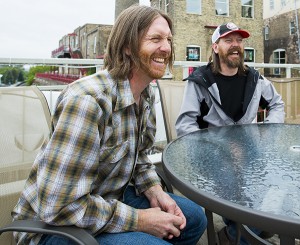 Brad Nelson, left, minister of culture and propaganda for Fitger’s Brewhouse or more simply company spokesman, and his brother, Tim Nelson, co-owner and president of Fitger’s, talk about how they ended up in Duluth and how their business and the craft brewery business has evolved since they started in the mid-1990s. – Minnesota Public Radio News

Beer has helped the city transform itself from a city largely built on the mining and shipping industries to what Mayor Don Ness calls the “new Duluth,” one also defined by arts and the outdoors.

That transformation may well have begun two decades ago. Long before the current craft beer craze hit Minnesota, Fitgers Brewhouse opened in Duluth. At the time, it was one of only a handful of microbrewers in the state.

Of course, the idea for the brew house was first hatched, over beer.

Co-founders Rod Raymond and Tim Nelson, and Nelson’s younger brother Brad — teammates on the University of Minnesota Duluth’s cross country ski team — traveled out west to race. They fell in love with the burgeoning micro beer scene in towns like Bend, Ore.

“It already involved all the people and things we loved, music, the outdoors,” Brad Nelson said. “In Bend, the places where that was already happening, after a ski race weekend, it was, “after party at the Deschutes Brewery!”

Tim Nelson recalls thinking, why not do this in Duluth?

“We saw the similarities in the towns and the cultures, at least among our friends,” he said.

Originally from Brainerd, the Nelson brothers are now in their mid-40s. Bearded, and with shoulder-length hair, they have a passion for good beer — and their adopted hometown.

After Tim Nelson earned his MBA, he and Raymond leased a space in the century-old Fitger’s Brewery complex last used as a Rocky Roccoco pizza franchise that had sat empty for 10 years. They opened Fitger’s Brewhouse in 1995. Today, it brews 3,000 barrels a year here now.

The scene they were so attracted to out West barely existed in Duluth when they opened. The original Fitgers had stopped brewing beer two decades earlier, and many Minnesotans had never heard of craft beer. 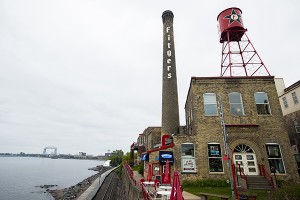 Fitger’s Brewhouse is located along the shore of Lake Superior in Duluth. – Minnesota Public Radio News

But in a city with only one venue where local musicians played original music, the Nelsons — who are also musicians — saw an opportunity.

Their gamble paid off. Nationally-known acts like Low and Trampled by Turtles honed their skills on the brewhouse stage. Soon the Homegrown Music Festival emerged. Meanwhile Brad Nelson founded Duluth’s first alternative paper, the Ripsaw. It chronicled the growing music and outdoors culture.

“They were among the earliest promoters of what Duluth could be — taking the attributes that had been kind of there, the original live music or the outdoor recreation stuff that was always kind of on the outside looking into how the city was identified,” Ness said. “I think over time we started to build this stronger identity that focused on the things they had been advocating for back in the ’90s.”

“I made zero money for the first three years,” he said. “I worked for free for Fitger’s Brewhouse. Years four and five, I took home a thousand dollars a month. My mom and dad, luckily paid for my housing, and I could eat at the brewery.”

“Music is ultimately there to sell beer,” Tim Nelson said. [Local musician] “Charlie Parr, he knows it; that’s his role for us. It’s just how it keeps it all rolling. That’s the product we have to drive culture.”

“It was so ahead of its time. It was a visionary thing they did,” said Hansi Johnson, a longtime friend of the Nelsons who now helps develop trails in Duluth for the Minnesota Land Trust.

“Coming from Duluth at that time, which was still known for being a down and out industrial town in northern Minnesota, to all of a sudden have this truly authentic brewpub coming up, it was like the first thing I think a lot of people rallied around and said, ‘Wow, you can actually get involved in the community and do something like this,’” Johnson said.

As Just Take Action prepares to open its fifth business in the refurbished historic train depot, the company employs over 200 people and is approaching $10 million in annual sales.

Businesses like the brewhouse are important because they can help attract other locally-minded entrepreneurs, said Joe Cortright, an economist in Portland, Ore., who studies regional economies.

“I think we have some pretty good anecdotal evidence that the presence of microbreweries in particular neighborhoods and certain communities plays a really important role in triggering and then helping support revitalization,” said Cortright, president of Impresa Consulting.

Joel Kotkin, an urban studies fellow at Chapman University in Orange, Calif. But he cautions cities not to rely too heavily on them.

“I have some skepticism of just sort of thinking, we’re going to be hip, cool, [promote] tourism,”Kotkin said. “Because you know what? There’s a lot of hip, cool tourist towns in this country. And I’m not sure Duluth is first on the list.”

Tim Nelson said he and his partners will enjoy what they’ve built, and let other Duluth entrepreneurs take the lead in shaping the city.

Ness recalls a lot of skepticism when the brewers got their start.

“A lot of folks on the front end were saying, ‘No, that can’t happen in Duluth,’” he said. “They’ve proven they can, and it has, and they’ve been very successful because of it, and they’ve continued to double down on those ideas that they imported into this community.”