Funeral services for Donald A. Koch, 94, of Glenville, will be at 10:30 a.m. Tuesday, July 22, 2014, at the New Life Christian Church. Officiating will be the Revs. Steve DeFor, Mike Gerhardt and Vern Harris. Interment will be at Hillcrest Cemetery with military honors accorded by the American Legion and VFW Honor Guard. Visitation will be from 5 to 7 p.m. Monday at the Bayview/Freeborn Funeral Home, and one hour prior to the service at the church on Tuesday. Online condolences are welcome at www.bayviewfuneral.com.

Don died on Thursday, July 17, 2014, at the Good Samaritan Society of Albert Lea. 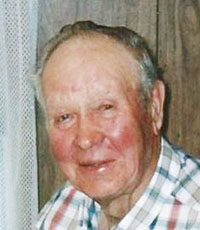 Donald Albert Koch was born in St. Anthony, Iowa, on Nov. 14, 1919, the son of Albert W. and Gertrude (Mayer) Koch. He grew up and graduated from high school in Iowa. On Dec. 21, 1941 Don was married to Lois Naomi Snell in Marshalltown, Iowa. He served in the U.S. Army from 1942 to 1945. He was a mess sergeant and was always proud of serving a hot meal for 3,000 to 5,000 men every day. Following his discharge Don returned to Iowa. In 1951 Don and Lois came to Freeborn County where they farmed together. He was a member of the VFW and a life member of the Disabled American Veterans. He was a member of the Church of Christ in Austin where he served as an elder for over 30 years. Don served on the Farm Bureau Board, the Clarks Grove Creamery Board, and the Hillcrest Cemetery Board. He served on the Shell Rock Township Board for many years and volunteered with Community Education. Don also sold seed corn and beans for many years.

Don was preceded in death by his parents; his wife, Lois; sons Ron and Bob; sisters Darlene Cannon and Shirley Gallentine and brother Kenneth Koch.

Memorials are preferred to the Austin Church of Christ, the Youth for Christ, or to Hillcrest Cemetery.