Fishing is fun in the summer 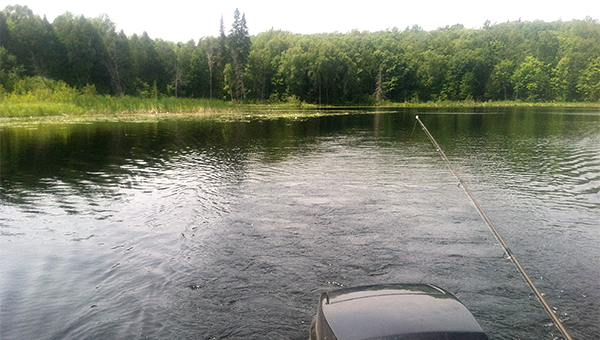 There was a time that whenever I would hear the phrase “dog days of summer,” I would get the feeling that fishing season was almost over for another year. It has been many years since I have had that feeling about the dreaded dog days because some time ago I took it as a challenge to prove that I could catch fish most any time of the year. I have never thought of myself as a great fisherman, nor even a very good one for that matter. Persistent might be a word that is closer to the truth. 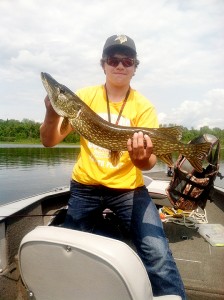 Dylan Herfindahl holds a pike he caught June 17 while trolling one of the many small lakes in the Marcell area. — Dick Herfindahl/Albert Lea Tribune

About a week ago, my grandson Dylan and I headed north for a week of fishing at the cabin. I have always enjoyed the time spent at the cabin with my grandkids and being able to spend a week fishing with Dylan was great. Dylan is almost 16, but he still likes to spend time fishing with old grandpa. Any time that we were at the cabin and not fishing, he was busy making spinner rigs, cleaning reels and putting new line on any reel that needed it.

We fished five lakes that week and had pretty good success on most of them. On a trip back to a little remote lake not far from the cabin, we spotted a jackrabbit crossing the road and another at the edge of the woods. I have not seen a jackrabbit for quite a few years, and Dylan said it was the first one that he had ever seen. He jokingly said that looked like it had kangaroo legs.

Dylan and I had been at the cabin about three weeks previous and experienced some great fishing on Spider Lake (my favorite). At that time, I told him that the lake would be different the next time we fished it. Patterns change, and as summer moves on the fish move to different locations for forage and to be in their comfort zone. When we first hit the water, we tried the area that had been good earlier, but now it was a totally different story. I told Dylan that I’d like to try a spot that my old friend Bid — who was the previous owner of Spider Shores Resort — once told me about. He would always talk about fishing a sunken island in front of this tall broken pine. This was quite some time ago — and that pine has since either fallen or blended in — but I knew the area and eventually located that small sunken island. Almost immediately upon finding it, I caught a nice-sized walleye, but unfortunately that was to be the only one of the morning. Even with that, I was quite sure that Dylan was thinking that I actually knew what I was doing.

We spent the rest of the day casting or trolling for muskies, which is what we had intended to do all along. We caught quite a few pike and bass, but alas, the toothed one that we sought was not going to make an appearance on that day. Dylan really gets excited when you talk about fishing muskies, and I know that he will get his share in due time.

The next day we decided to try a pristine little lake that is a short distance from the cabin. I have mentioned in the past that you could take this lake and drop it in the middle of the Boundary Waters, and it would not look out of place. There are no cabins on this lake and most days that you visit it you will more-than-likely not see another boat. This lake does not hold any walleye, but it does have plenty of pike, bass and panfish. We go to this lake primarily for the pike. At times it can be pretty darned good, and this turned out to be another of those times.

We started trolling the weed edges, which is kind of easy to do on this clear little lake. It is a fairly long narrow lake with finger bays and a maximum depth of 80 feet. I only mention this because after trolling the shoreline with minimal success, I decided to follow up on a tip given me by a neighbor who likes to fish the same lake. He told me that a couple of years ago he spotted fish suspended in 80 feet of water. So he tried trolling the middle of the lake using deep divers. Somewhat to my surprise we caught quite a few bigger pike in 64 to 52 feet of water using deep divers. I can still hear the screaming of my drag as a pike attacked the lure on the other end of my old Diawa Millionaire fishing reel.

Both Dylan and I had a great time fishing that week, and the time that we spent together is something that you cannot possibly put a price tag on. At the end of the week, we both agreed that Spider is still our favorite lake. The day that we got home he was already talking his dad into going out on Fountain early the next morning. What can I say? He’s hooked!

Until next time, enjoy the great outdoors and take some time to go for a walk, take a bike ride or introduce a youth to the great outdoors. We could all take a little time out of our busy lives to step back and take in some of the wonders of nature that we have nearby.

Please take a little time to remember those who served and those who gave the ultimate sacrifice so that we are able to enjoy all the freedoms that we have today.