Editor’s note: We sent Albert Lea Tribune intern reporter Jacob Tellers, who graduates from Liberty University this summer, on a quest to taste and review the food at the Freeborn County Fair. Here is his analysis. 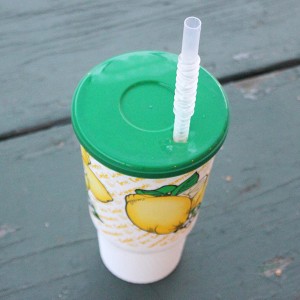 The Large Lemonade from the Goldstar Lemonade stand was cold and refreshing. – Jacob Tellers/Albert Lea Tribune

For a drink that is fairly simple to make, not all lemonade is created equal. The quest for lemonade that is made just right can be difficult, especially when there are a lot of options to choose from.

After considering several options, I tried the lemonade at the Goldstar Lemonade stand that is shaped like lemonade.

The best part was that the lemons were sliced and freshly squeezed at the stand individually for each drink, rather than being made en masse and stored in a large container. The lemon juice is mixed with water and sugar and served in a cup with ice.

The lemonade was cold and refreshing, it wasn’t too sour or sweet. The only complaint I would have was that it was perhaps slightly watery, but I might be a bit picky. 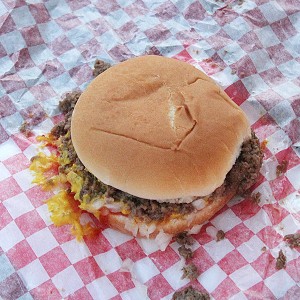 The Crumbie Sandwich tasted anything but crumbie.

The sandwich could be described as a mix between a sloppy joe and a hamburger with ground beef instead of a grilled hamburger pattie, but served with the usual hamburger toppings.

The choices of toppings included ketchup, mustard, pickles and onions. I went with everything but the pickles.

The sandwich was messy to eat, and the napkins handed out with it came in handy.

The ground hamburger was moist and not too dry. Though not exciting, it was a simple and satisfying meal.

A regular Crumbie Sandwich goes for $3. 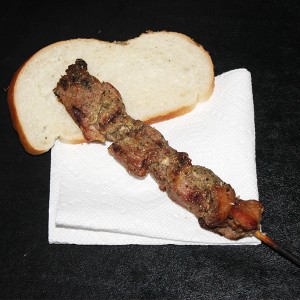 Although kebabs are one of my favorite foods, I’ve found they can be hit-or-miss items at fairs, especially when it comes to the quality of the cuts of meat.

That wasn’t the experience with the pork kebab I had Wednesday. All the cuts of meat were good, with no gristle and little fat.

The meat was grilled with a simple seasoning. It was flavorful, but not overbearing. The kebab stick was filled generously and included a plain slice of bread stuck on the top.

It was served warm, but did cool off pretty quickly, so I recommend eating it right away. 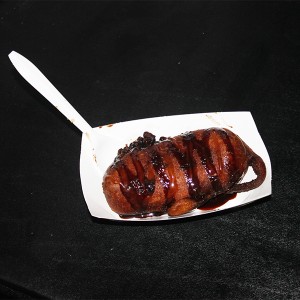 A battered, deep-fried Snickers bar is probably the one snack that most epitomizes the gluttony of a fair.

The candy bar was freshly battered and deep fried after I ordered it. It can be eaten plain with a spork or with the choice of caramel, chocolate syrup and whipped cream as toppings. I went with the caramel and chocolate syrup for mine.

The best comparison I could make would be that it tastes like a caramel, peanut, nougat and chocolate  filled donut. In other words, heaven on earth.

I’ve had deep fried candy bars in the past and this one lived up to my high expectations. If you haven’t tried one before, you definitely should.

The cost of the the deep-fried Snickers bar was $5.