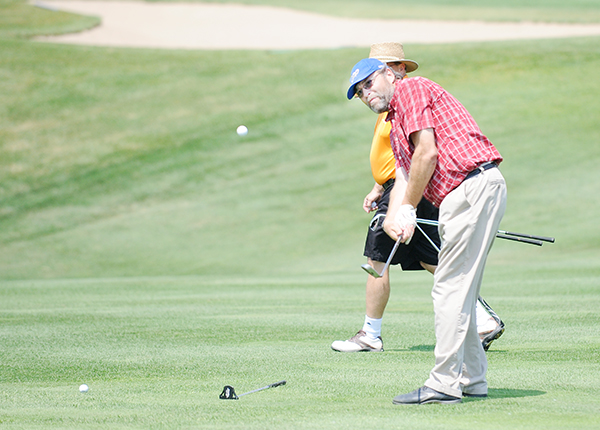 About $7,500 was raised in 2013 after expenses were covered, according to Albert Lea-Freeborn County Chamber of Commerce Executive Director Randy Kehr, who said he anticipated raising around $8,000 this year.

The cost per team was $375, which covered golf carts, an 18-hole round of golf and an evening pork chop dinner.

Money was also raised through business sponsorships of each hole and green, raffles and games players could participate in for a small fee around the course.

“Every year we give $5,000 of scholarships to graduating seniors anywhere in Freeborn County and an additional $1,000 scholarship to a student at Riverland,” Kehr said.

Food vendors were also available, with options including pizza and freshly grilled hotdogs.

The winners of the tournament received gift cards to the Wedgewood Cove pro shop.

According to Kehr, the tournament alternates each year between Wedgewood Cove and Green Lea.

Robert Hoffman, who previously volunteered running the tournament the past 10 years, took a turn at being one of the golfers this year.

Hoffman described it as an enjoyable experience, if not more expensive.

According to Hoffman, because of how much money the Chamber of Commerce raised, they have increased the size of the scholarships offered from $750 to $1,000.

Chamber of Commerce Ambassadors served as volunteers, running different events and mini-games on the course as well as handing out water to volunteers.

According to Kehr, the tournament was played on a blistering 116-degree day three years ago.