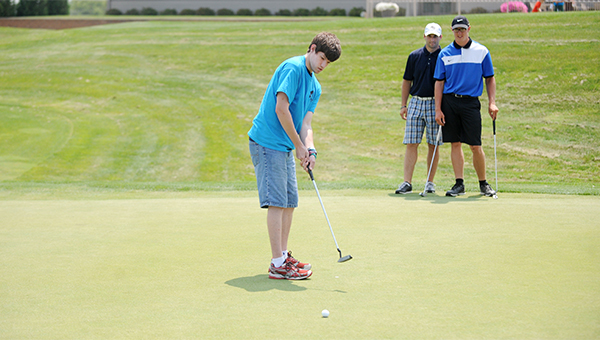 “He had a vision that people with disabilities would have the same opportunities as everyone else,” Arc program director Jo Lowe said.

Twenty-four teams competed in an 18-hole best-shot tournament. Each team was composed of players from area businesses who helped sponsor the tournament.

“It has enabled us to offer a lot more recreation and leisure programs locally,” Lowe said.

Multiple contests were held throughout the course, including a hole-in-one and putting contest, closest to the pin, longest drive and a chipping contest. Prizes included golf gear from the Wedgewood Cove pro shop as well as gift certificates to area businesses.

Many of the prizes are specific to the event with a putter being awarded to the winner of the putting contest.

New to the tournament this year was golf poker, Lowe said. Players received regular playing cards at five holes around the course with a prize being awarded to the player with the best hand at the end of the tournament.

The hole-in-one contest was sponsored by Vern Eide, with a 2014 Chevy Impala as the reward for a hole-in-one.

On hole No. 9, Arc volunteer Taylor Shaft putted for golfers for a $10 donation. Golfers received a birdie on the hole regardless of whether or not he sunk the putt.

After the tournament, raffles and a live auction took place. A golf wedge, a Ping hybrid (club) and gift certificates were among the items being raffled.