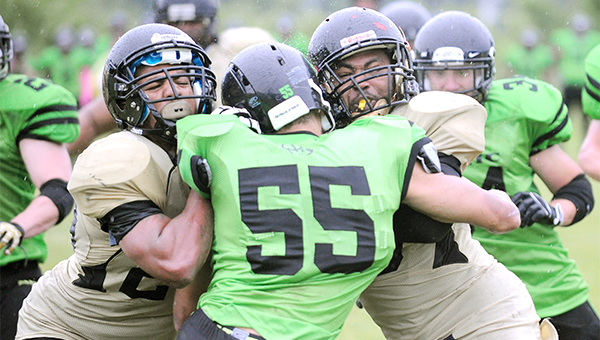 Lamar Sayles, left, and Sammie Rucker Jr. of the Albert Lea Grizzlies run into The Panic’s John Crape on June 28 during the first round of the playoffs at Grizzly Field in Frank Hall Park. Albert Lea won 20-5. — Micah Bader/Albert Lea Tribune

A season after a first-round playoff exit, the Albert Lea Grizzlies football team earned home field advantage for the first round and advanced to the semifinals with a postseason win over The Panic.

The Grizzlies were happy with their improvement, but not content with their finish as they lost to the Southwest Huskerz in the semifinal round of the Southern Plains Football League playoffs after finishing the regular season with a 5-3 record. 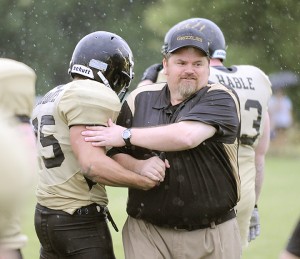 Jered Talamantes, left, a defensive back for the Albert Lea Grizzlies celebrates with head coach Stephen Piper June 21 after intercepting a pass against The Panic in the first round of the playoffs. Talamantes led Albert Lea’s secondary with 10 picks on the season. — Micah Bader/Albert Lea Tribune

The Grizzlies wrapped up the regular season with a 42-24 win over The Panic to take fourth place in the nine-team league standings.

In the first round of the playoffs, the Grizzlies played a rematch against The Panic. Albert Lea was held scoreless in the first half, but trailed only 3-0 after a torrential downpour during the first two quarters. The Grizzlies put up 20 points in the second half to win 20-5.

According to defensive coordinator Jeff Jimenez, two keys to the Grizzlies getting back to the playoffs with a win was the play of their special teams and secondary.

“It makes such a difference to know you are going to get seven points when you score a touchdown,” Jimenez said.

Jimenez was also pleased by the play of his secondary, which he often put in man coverage.

“I couldn’t talk about them enough,” Jimenez said.

Piper called Albert Lea’s first-round playoff win their most complete game of the season, which was something that was an issue during the regular season.

The Grizzlies’ loss to the South Central Hawgs came after Albert Lea entered the fourth quarter with a 15-14 lead before losing 22-14. In the Grizzlies regular-season win over The Panic, they were outscored in the second half after jumping ahead to a 29-0 first half lead.

The playoff victory was emotional for Jimenez, as it was his first postseason win since he began coaching in 2007.

“It meant a lot to me, and it meant a to the Albert Lea guys,” Jimenez said.

The Grizzlies’ season ended with a 39-6 loss in the semifinals against the eventual SPFL champion Southwest Huskerz.

The Grizzlies postseason loss to the Huskerz was the third time they had defeated Albert Lea this season.

As tough as it was to end the season without a title, Piper said losing to the eventual champion took a bit of the sting out of the loss.

Albert Lea was short-handed at running back in the semifinals as leading rusher Lamar Sayles served a one-game suspension following a late ejection against The Panic the previous week.

The Grizzlies’ three regular season losses came against the Huskerz (7-1), Hawgs (7-1) and Rampage (6-2) — the three teams that finished ahead of Albert Lea in the standings.

The Grizzlies defeated every team with a worse record.

To continue to improve next season, Piper said he and the rest of his coaching staff will need to work on making better game-to-game scheme adjustments to create matchup advantages.

Piper said he has a lot of trust in his players, but the coaches need to make sure they are placing them in the best positions to succeed.

Sayles, the rookie all-purpose player from Waterloo, Iowa, finished the season with eight receiving touchdowns and five rushing touchdowns to go along with 675 rushing yards on 73 carries and 28 receptions for 425 yards.

Wide receiver Marquis Shaw led the Grizzlies with 25 catches for 458 yards and five touchdowns. He was able to use his height and athleticism to connect with Tolbers to convert in multiple third-and-long situations.

“There were a lot of new guys on offense,” Piper said.

Even though the season just ended, Piper is already considering which positions will have holes to fill for next year.

A dedicated running back is something Piper is searching for as well.

According to Piper, running back Sammy Rucker Jr. is looking at potentially playing in Europe.

“That’s great for him but not so great for us,” Piper said.

The defense will lose five-year nose tackle Chris Habel, according to Jimenez.

“He was an animal out there,” Jimenez said. “We will miss him dearly. He was an unbelievable player.”

With half the team made up of rookies, Jimenez says he expects to return the majority of his defensive starters.