He just keeps on swimming 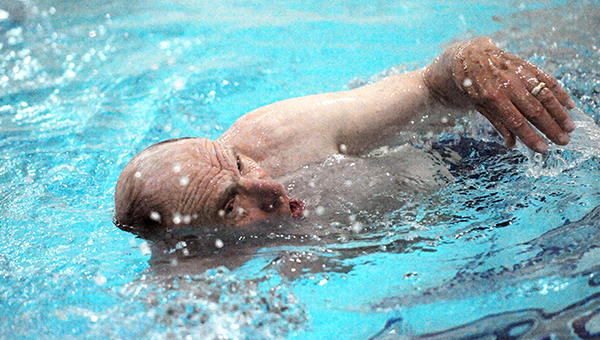 Ray Hange doesn’t think that what he does is anything special, but for five days each week over the past 44 years he’s gone to the Albert Lea Family Y to swim laps across the pool for 45 minutes.

Born in 1929, Hange’s world has changed over the past 85 years, but his active lifestyle hasn’t.

“There wasn’t TV back then,” he said jokingly.

Hange can’t recall ever being taught to swim. He said it was something that just came naturally to him. As a kid, and even as an adult, he always prefered to be outside and active as opposed to sitting inside and watching TV.

Growing up, Hange didn’t swim competitively, though he did work as a lifeguard during high school.

Born and raised in Austin, Hange moved to Albert Lea in 1956 when he purchased a Dairy Queen franchise that he ran for 30 years.

Hange began swimming at the Family Y in 1970.

“I had a very good friend who had back problems, and they told him that he might avoid some back surgery if he would swim regularly. So he just asked me to join him,” Hange said.

From that point on he was hooked just like the muskies he regularly fishes for.

“Exercise is a habit,” Hange said. “You get in the habit of doing something and you just keep doing it.”

Hange has a routine he follows every time he swims.

“I go 20 minutes on the backstroke, 20 minutes on the freestyle and another five minutes slowing down to a sidestroke,” he said. “When I hit the water I’m going 45 minutes nonstop, but I’m much slower than I used to be.”

Hange said that he doesn’t count how many laps he swims, but he knows that he swam a lot more when he was younger.

He swims Monday through Friday, unless he goes fishing.

“For me, water is relaxation,” Hange said. “Even though I get in there and swim the laps, I’m relaxed in the water.”

One benefit of swimming is that there is less friction on the body.

“I was never a jogger. Never

wanted to jog. I’ve seen too many people with knee problems and everything else from it. You don’t have that wear and tear in swimming that you do with jogging.”

Hange says that swimming keeps his body limber and helps prevent his muscles from getting stiff.

“Everyday Ray” is Hange’s nickname at the Family Y.

“I couldn’t say enough about the Y,” Hange said. “It’s a big asset to the community.”

Hange said he always wants more people to check out the other services the Family Y offers.

“I pump iron about 9 o’clock every night,” Hange said. “Small iron. Nothing big.”

“The common belief is don’t smoke and exercise,” Hange said about what people see as a healthy lifestyle.

Hange didn’t necessarily want to attribute his good health to his healthy lifestyle, although he acknowledged that it probably helped him.

“I’m blessed,” Hange said. “No one likes to admit it most of the time, but I know when I’ve been blessed.”

“Absolutely” Hange replied when asked if he planned to keep swimming as long as he could.