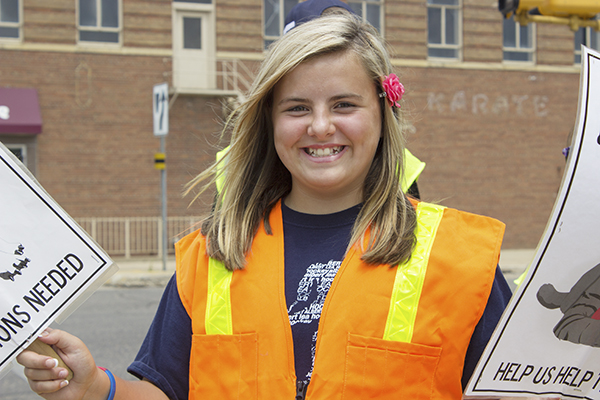 Daysha Luttrell is all smiles as she helps collect donations for the Freeborn County Humane Society with Buckets on Broadway on Friday. – Hannah Dillon/Albert Lea Tribune

The Freeborn County Humane Society hit the streets to collect donations for its general operations fund on Friday afternoon with their Buckets on Broadway fundraiser.

Volunteers stood on all corners of the intersection of Broadway Avenue and Main Street in downtown Albert Lea with signs and donation buckets. 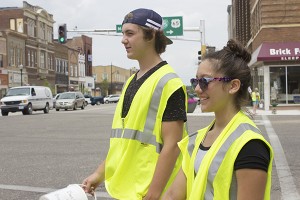 Ryan Arbuckle, assistant director of the Humane Society, said the Humane Society aims to collect about $10,000 to $15,000 in donations to help with operating costs such as electricity and pet food. He said he thinks last year they collected about $4,000.

To put the numbers in perspective, Arbuckle said that the Humane Society’s veterinary bill is over $4,000.

The Humane Society also sells lawful gambling, such as pull tabs, to help raise money. However, the lawful gambling is monitored by the state closely so the money can only go to specific items, including veterinary bills, Arbuckle said.

The Freeborn County Humane Society is at 101 James Ave. It can be reached at 377-8501 for more information on pet adoption, donations and volunteering opportunities.