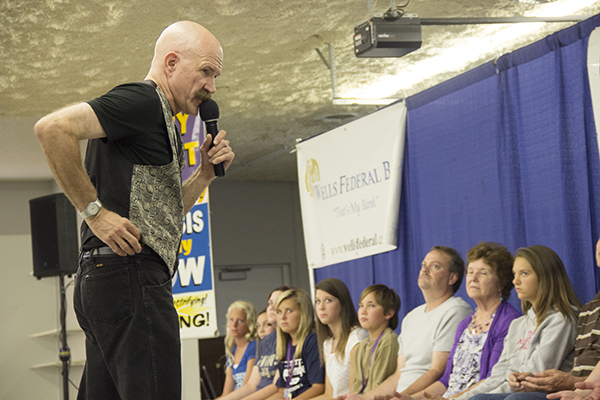 Terry DaVolt explains the hypnosis process to the volunteers during his show on Wednesday. – Hannah Dillon/Albert Lea Tribune

The Fairlane Building at the Freeborn County Fair was packed with people Wednesday ready to experience comedy and hypnosis.

Terry DaVolt, comedian and hypnotist, held his shows at 4 and 6 p.m.

DaVolt started off the show explaining that hypnosis isn’t like what people see in the movies. Rather, hypnosis is a type of focused relaxation, he said.

Hypnosis happens all the time, DaVolt said. He gave examples such as daydreaming or getting lost in thought while doing other tasks. Mainly, DaVolt said that hypnosis comes down to breathing and relaxation to enter a state of focus required for hypnosis.

He also said that no one can be hypnotized against his or her will, despite what popular culture might show.

After going through the basics of hypnosis with the audience, DaVolt invited volunteers to come to the front of the room for the hypnosis demonstration. There were no shortage of volunteers as both teenagers and adults got up from their seats to be hypnotized.

For the next hour, DaVolt did many hypnosis exercises. After helping the volunteers focus and relax into a state of deep hypnosis, he used vocal commands to make them act like they were on a beach, riding a horse, on a rollercoaster or at the world’s funniest movie.

He even had the volunteers act like they were James Bond in a handful of undercover situations, such as a model and Arnold Schwarzenegger.

The audience applauded, cheered and giggled at the volunteers’ antics, and a sense of awe filled the room as the show went on.

DaVolt comes from Drexel, Mo., where he started with show business after reading a juggling book in his youth. He was voted class clown his senior year before going on to become a worldwide entertainer.

He has performed across the country for fairs, events and corporations and overseas in places like England and Japan. DaVolt’s website boasts that he has entertained millions since 1983.

DaVolt will perform at 4 and 6 p.m. Thursday and at 2, 4 and 6 p.m. on Friday and Saturday in the Fairlane Building at the Freeborn County Fair, 1031 Bridge Ave. 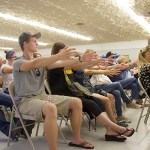 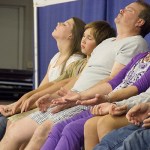 The volunteers at Terry DaVolt’s hypnosis show on Wednesday at the Freeborn County Fair bask in the sunlight of a beach while hypnotized. – Hannah Dillon/Albert Lea Tribune 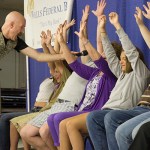 DaVolt holds the microphone up to one of the volunteers at his hypnosis show Wednesday. In this segment, he hypnotized the volunteers into believing they were on a roller coaster. – Hannah Dillon/Albert Lea Tribune 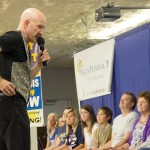 Terry DaVolt explains the hypnosis process to the volunteers during his show on Wednesday. – Hannah Dillon/Albert Lea Tribune 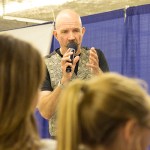 DaVolt, who has been entertaining since 1983, explains that hypnosis is simply focused relaxation, not magic like in the movies. – Hannah Dillon/Albert Lea Tribune