A Minneapolis man is hoping to make big waves this November in the race for U.S. Senate.

Independence Party candidate Kevin Terrell, of Minneapolis, said he wants to bring transparency, accountability and the voice of the citizens back to Washington. The seat is presently held by U.S. Sen. Al Franken, a Democrat. 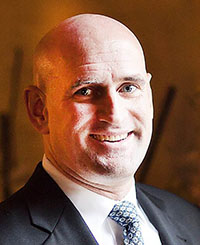 Terrell stopped in Albert Lea on Friday to meet with the Tribune and other residents at Prairie Wind Coffee. He has been traveling the state, meeting at coffee shops and county fairs and walking in parades, to spread the word about his goals for elected office.

“You’re not going to get anything different from choosing one of the other two parties,” Terrell said. “It’s going to be more of the same.”

Terrell said the root cause of many of the problems in government have come from a lack of representation. He said many of the U.S. senators and representatives are controlled by special interests.

“We need someone outside of those special interests who’s free to vote to represent the people,” he said.

Terrell said if he is elected he will be as open as possible, noting he will publish his schedule daily so people know who he meets with and what was discussed, and he will have time to meet with Minnesotans each day.

He also wants to have quarterly virtual town hall meetings as a way to give a progress report to the people of the state.

“Let’s make clear who’s working for you,” he said. “It’s possible to bring Washington back to the people.”

A political science major, Terrell said his motivation to run for Senate started in 2012 when the Federal Aviation Administration tried to impose new airplane superhighways in the sky out of the Minneapolis-St. Paul International Airport.

He said he was part of a leadership team that organized 6,000 people to stand up against the changes, and in February, they found out they won. The FAA backed off its attempt to implement the changes.

“You can make a difference,” he said.

Terrell, who has been involved with the Independence Party for about five years, runs a management consulting firm.

He previously worked for the CIA in Washington and recently co-founded a nonprofit organization that helps get books to low-income children. He is married to Thuy Nguyen, who left Vietnam as a refugee at 3.