Funeral services for Inez M. Shaunce, age 96, of Geneva will be held at 1 p.m. Monday at the Community Lutheran Church in Geneva. The Rev. Kristen Venne will officiate. Interment will be in the Geneva Cemetery. Visitation will be from 2 to 4 p.m. today at the Bayview/Freeborn Funeral Home and one hour prior to the service at the church on Monday. 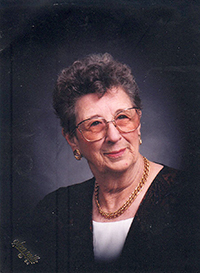 Inez Mabel Shaunce was born on September 29, 1917, in the Manchester area, the daughter of Theodore and Thea (Knutson) Thostenson. She grew up in the Hartland/Manchester area and attended District #21 school. On October 30, 1940, Inez was united in marriage to Archie Shaunce in Hartland. Inez farmed with her husband for many years and also was retired from Land-O-Lakes. She was an active member of the Community Lutheran Church where she was active in the mission circle and the quilting group. She was a member of the VFW Auxiliary and the Eagles Auxiliary. She enjoyed sewing, crocheting, fishing, watching “Bandwagon” on TV and especially visiting with family and friends. Blessed be her memory.

Inez was preceded in death by her parents, her husband Archie, her son Gerald, her brothers Alvin, Norvin, Willie and Ansel and her sister Theodora Lund.