Funeral services for Irene Erickson will be at 10:30 a.m. Thursday at Grace Lutheran Church in Albert Lea with the Rev. Janet White officiating. Visitation will be from 4 to 7 p.m. Wednesday at Bonnerup Funeral Service and one hour prior to the funeral service at the church. Interment will be in Hillcrest Cemetery. 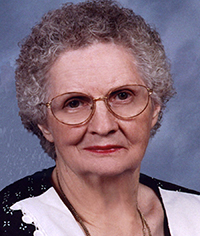 She attended a country school in Fraser through eighth-grade. Irene was confirmed at Zion Lutheran Church in Fairmont and married Howard Erickson at Zion on June 26, 1954. They made their home in Albert Lea and became members of Grace Lutheran Church. She and Howard could often be found completing jigsaw puzzles in their free time. Irene stayed busy as a housekeeper for area families, a job from which she never really retired. She enjoyed sewing, quilting, cooking, baking, gardening and socializing with neighbors over a cup of coffee.

She is preceded in death by her parents, Gustav and Rose Kutnink; husband, Howard Erickson; daughter-in-law, Dianne Kutnink; and brothers Victor Westendorf and Arlo Kutnink.