Funeral services for Irene H. Malakowsky of Hartland will be at 1:30 p.m. Thursday at St. Peter Evangelical Lutheran Church of New Richland. The Rev. Scott Williams will officiate. Interment will be in St. Peter‘s Cemetery. Visitation will be one hour before the service at the church. Friedrich Funeral Home in New Richland is assisting the family with arrangements. 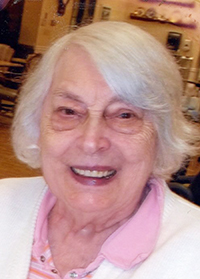 She was born on July 3, 1918, in Waseca County, the daughter of August and Agnes (Brandt) Syring.

She attended rural country school and then began housekeeping for area families near Minnesota Lake. She met Carl Malakowsky, and they married on June 2, 1938. They lived in Minnesota Lake for a short time, then moved and made their home on a farm near Hartland. She enjoyed gardening, cooking and being a farm wife. She lived on the farm until her health failed, and she entered New Richland Care Center in 2006.

Irene was a member of St. Peter Evangelical Lutheran Church in New Richland.

She was preceded in death by her parents; her husband, Carl; her son, Charles; her brother, Leonard Syring; her sister, Leona Syring; granddaughter, Michelle Malakowsky; and great-grandson, Derek Malakowsky.