‘It helps seeing survivors:’ 8-year-old to be recognized 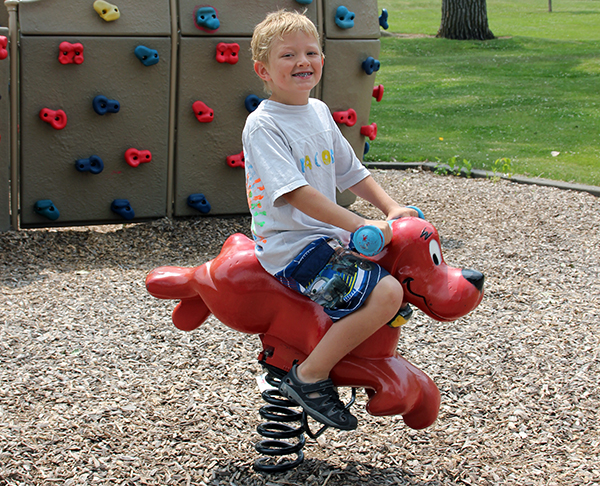 Dacoda Malakowsky plays on a spring rider in the shape of Clifford the Big Red Dog. – Erin Murtaugh/Albert Lea Tribune

HARTLAND — Eight-year-old Dacoda Malakowsky bears a grin with his new braces on his teeth as he slides down a slide with other children.

But he’s not just another child. Dacoda is a cancer survivor and will be recognized at the Freeborn County Relay for Life. 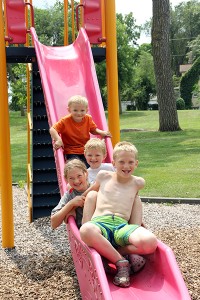 Dacoda Malakowsky, in white, plays on a slide. Malakowsky survived a form of pre-leukemia and has been in remission for five years. – Erin Murtaugh/Albert Lea Tribune

The Malakowsky family resides on a farm west of Hartland by Spicer Lake. On Father’s Day of 2008, they went out to eat for dinner.

His parents, Amanda and David, knew something was wrong with their son, who at the time was only 2 years old, when he only ate a few bites of Jell-O and mashed potatoes. Dacoda was also running a fever of 103 degrees.

Amanda said she usually doesn’t take her children up to Urgent Care, but she knew something was just not right with Dacoda.

When they got there, he was sent for an X-ray and had blood drawn for the laboratory. The nurse pointed out to Amanda that he had been rather sleepy, which Amanda then realized he had been sleeping most of the day. The next thing Amanda recalls is Dacoda being hooked up to intravenous fluid and being sent to the Mayo Clinic in Rochester.

The ambulance they were riding in radioed ahead to Rochester, saying it was possible that Dacoda had bilateral pneumonia. Tests at the hospital showed it could be the Epstein-Barr virus or mononucleosis. Doctors also ordered a test for leukemia.

The results showed Dacoda had myelodysplastic syndrome monosomy 7, a form of pre-leukemia. The only cure — a bone marrow transplant. Dacoda also underwent chemotherapy and radiation.

Now, Dacoda is five years in remission but has some complications from being sick, including thyroid problems. Last year, a family friend asked if Dacoda would walk the survivor lap of the Freeborn County Relay for Life. This year, the same family friend asked if she could nominate Dacoda to be one of the honored survivors. Dacoda’s parents agreed.

“It helps seeing survivors,” said Amanda, because when Dacoda first got sick she visited with a parent of another sick child, and has been there for a mother whose child was sick, too.