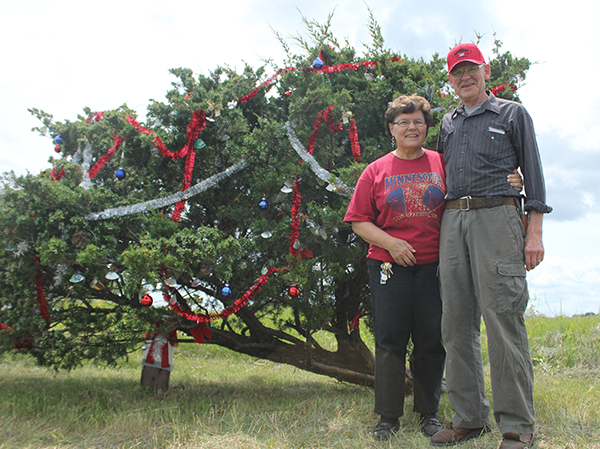 Margie and Jack Barber stand in front of a tree off of U.S. Highway 65 that they decorate with Christmas decorations each year in July. – Sarah Stultz/Albert Lea Tribune

To many passers-by, it is known for its year-round Christmas decorations. But who decorates the tree, and what’s the story behind it?

That’s where Glenville residents Jack and Margie Barber come in. 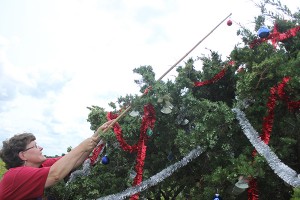 Margie Barber places an ornament near the top of the tree off of U.S. Highway 65 while decorating last week. – Sarah Stultz/Albert Lea Tribune

The Barbers were at the tree last week, taking off old decorations and putting on new ones. They said it’s something they have been doing for about 15 years. They did not know who decorated the tree before them.

Margie said she took an interest in the tree after underground fiber optics were installed several years ago. At that time, the tree was knocked down and within a matter of days, all of the decorations were removed.

Somehow, she said, the tree managed to stay alive — though it now sits on its side.

She said Christmas always held a special meaning in her life, so she decided to adopt the tree and take on

When Margie finished fifth grade, a group of women in the TTT Club from Glenville selected her to attend a two-week summer camp. The club furnished everything needed for the camp. While there, she received gifts as they celebrated Christmas in July for all of the girls attending.

The following year, her sister, Nancy, was selected to go through the same experience.

When Margie was a senior in high school, she said her father, Dick Monson, died on Christmas Eve from a heart attack. When her mother, Donna, died in 1990, the six children divvied up all of her personal belongings. Margie inherited her Christmas decorations, along with other mementos.

Over the years, she said, several people have helped her, and in the last few years, she has partnered with Jack.

Jack prepares the tree to be decorated, trimming off dead branches. He uses a weed eater to cut down the tall grass around it.

Because the weather severely damages the decorations throughout the year, everything has to be removed and replaced annually. Margie said she budgets up to $20 every year to buy new items, typically buying items when their cost is reduced.

She said the best colors visible from the highway are silver, red and blue, but she has settled for other colors if those colors are gone from the bargain shelves.

When silver garland is in low supply, Jack cuts old or scratched CDs into quarters to hang from fishing line that create a shiny effect visible from the highway.

The couple uses a long cane pole Jack rigged with a hook to place the decorations on the higher parts of the tree.

While decorating, many people passing wave and honk their horns, including semi drivers and even the passing trains.

Margie said every time she drives past the tree throughout the year, she salutes the tree to honor her parents and the values they taught her.

Margie asked people who would like to contribute decorations, including old or scratched CDs, to drop them off at Barber’s Computer Classroom in the Knudson Building next-door to the post office in Albert Lea.