Albert Lea police arrested two juvenile males Thursday evening in connection to a spree of criminal damage in the city. 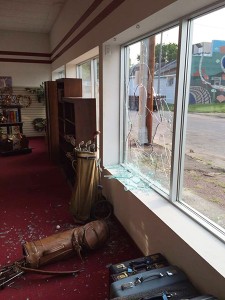 Rocks were thrown through windows of the Albert Lea Salvation Army Thrift Store Wednesday night in what appeared to a spree of vandalism in town. — Provided

The juveniles, ages 12 and 15, were arrested at 8:21 p.m. near the intersection of Green Avenue and Albert Lea Street. They were transported to the Red Wing juvenile detention center, and charges are pending.

They are believed to be the suspects of at least two dozen reports of criminal damage in the city early Thursday morning.

Damage appeared to be constrained among a circle of victims south of Hawthorne Street, west of Garfield Avenue, north of Main Street and east of Bridge Avenue.

Damage included smashed windows on vehicles, homes and buildings, along with slashed tires.

The first report of damage came in at 5:15 a.m. on the 700 block of Pillsbury Avenue. Reports continued throughout the day, and more are still expected to come in, said Albert Lea Police Department Lt. Darren Hanson.

The arrests came after police issued a plea to the public for any information about the vandalism.

Hanson said a business had surveillance video of one of the juveniles from the night prior, and police used that video to link to the two boys who were seen in the area Thursday evening.