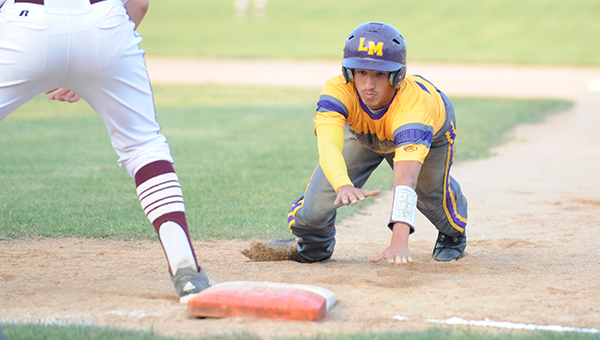 Mateo Peña of Lake Mills dives back to first base in the third inning Saturday against Newman Catholic in the Class 1A, District 4 finals. Peña went 0-for-2 with a run scored and a stolen base. – Jacob Tellers/Albert Lea Tribune

Trailing the defending state champions by only one run going into the fourth inning of the district finals, the Bulldogs were in prime position to pull of a stunning upset victory.

However, Newman Catholic rebounded and scored five runs in the fourth inning to build what would be an insurmountable six-run lead.

Lake Mills was unable to rally and fell 9-4 to Newman Catholic Saturday in the Class 1A, District 4 finals in Mason City.

The game got off to an ugly start for the Bulldogs, as they gave up four first-inning runs after committing three fielding errors including a botched play at first and a throw over the catcher’s head at home plate. 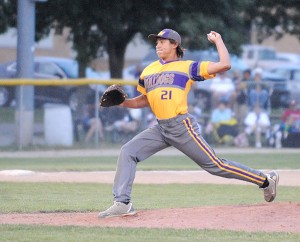 “You look up and it’s four nothing,” Blaser said. “It could have been a lot worse. I thought they did very well to just hold it at four.”

When Paul Pins drove in two runs off of a line drive to right field in the top of the third inning to lower Lake Mills’ deficit to just one run, Blaser said it looked liked his team had a real chance to pull off the upset.

“We chipped away,” he said. “We were able to get one run there in the second and two in the third and they were both on big two out hits.”

After giving up four runs in the first inning, the Bulldogs held the Knights scoreless in the second and third. But Newman Catholic managed to get the bases loaded twice in the fourth inning and added six more runs to build a 9-3 lead.

“They’re a great team,” Blaser said. “They take advantage of every mistake that you make. We didn’t play a clean game and as the result of it we lost.”

Saturday’s four runs were the most points the Bulldogs put up against the defending state champions in five games over the last two seasons.

“I would say tonight is the best contact we’ve made in three games (this season) against them, but obviously it wasn’t enough,” Blaser said. “We had some big hits. There were some solid line drives and we were able to score a few runs that way. But as a whole, we aren’t going to drive the ball the way Newman does.”

Bulldogs batters had no trouble making contact with the ball, but far too many at-bats ended with groundouts to first with hits directed straight toward Knights infielders.

“It makes it tough when you’re hitting ground balls at infielders that can make every play,” Blaser said.

A power-hitting team, Newman Catholic leads Class 1A baseball with 28 home runs on the season.

Despite some miscues early on, the Bulldogs outfielders managed to reign in most of the Knights deep hits.

In the bottom of the third inning, center fielder Mateo Peña ran down a ball that was only several feet short of the fence.

“I thought our outfielders played well,” Blaser said. “They tracked some balls down to the wall.”

With one inning remaining to keep their season alive, Lake Mills continued to fight.

Josh Peters opened the seventh inning with a grounder to third base, outrunning the throw to first after the third baseman struggled to collect the ball.

A line-drive single to right field by Levi Meyer gave Lake Mills two runners on base with zero outs.

With runners on base, three consecutive groundouts to first by Luke Kayser, Lincoln Boehmer and Peña ended the Bulldogs’ season as they collected only one run in the seventh.

Senior Paul Pins led the Bulldogs on offense going 2-for-3 with one run and two RBIs.

This is the second straight year that the Knights have knocked the Bulldogs out of the playoffs, but Blaser didn’t have any complaints with how his team finished.

“For the seven seniors it’s special. The district finals isn’t guaranteed. For them to play two district games on their home diamond and then to come out here and to at least have a chance. That’s all you want at the end of the year is a chance to keep playing so I’m real proud of the way they’ve done all season, especially district time,” Blaser said.