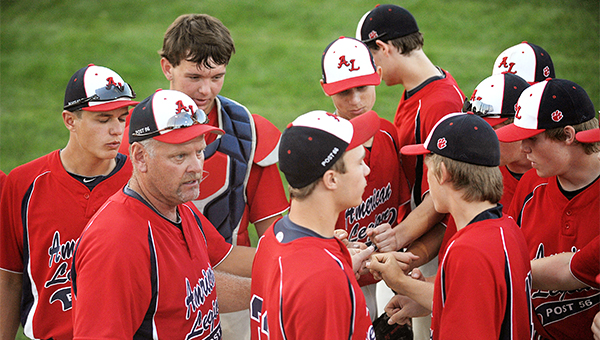 The Albert Lea Legion Post 56 baseball team gets ready to take the field Tuesday against Winona in the first round of the District 1 tournament at Maxwell-Loughrey Field on the campus of Winona State University. — Micah Bader/Albert Lea Tribune

Albert Lea has long road to finals through consolation bracket

In the first round of the District 1 consolation bracket, the Albert Lea Legion Post 56 baseball team isn’t sure what to expect from the Kasson Canes.

“They’re hard to read because even though they’re in our district, when you play them it doesn’t count as a district game,” said Albert Lea coach Jay Enderson.

Kasson enters with a 4-7 overall record and a 0-0 mark in the district. 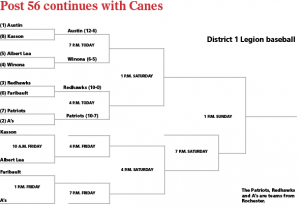 “We’ve taken the bottom seed every year so we don’t have to play every team in the division twice,” Franke said.

Enderson said he tried to set up a regular season meeting with the Canes, but they didn’t want to play.

Albert Lea brings a 9-9 overall record and a 5-8 district mark into the game that will be at 10 a.m. Friday at Maxwell-Loughrey Field on the campus of Winona State University.

It will be the first morning game of the spring or summer baseball seasons, Enderson said.

“Our goal as coaches is to get everyone up and ready to play,” he said. “We haven’t played that early, but we’re expecting a positive result.”

Including Friday’s game, Albert Lea will need to win five more games to make it to the state tournament.

In the first round of the tournament on Tuesday, No. 5-seed Albert Lea lost 6-5 against No. 4-seed Winona, while No. 8-seed Kasson fell 12-6 against No. 1-seed Austin.

Enderson said Albert Lea will need to get positive contributions throughout the pitching rotation to make a run.

“Some of our guys who aren’t expected to win are going to have the chance to prove themselves and rise up,” he said.