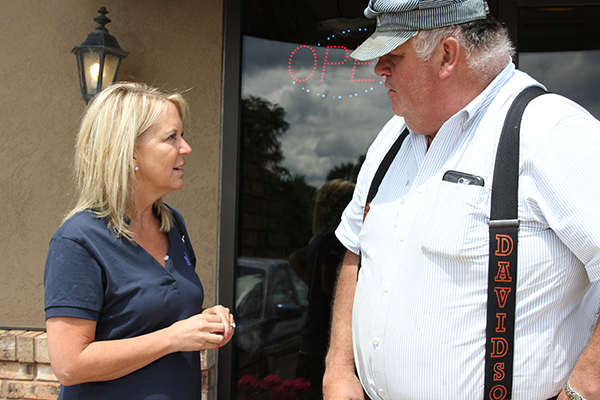 Two weeks away from the primary election, Republican lieutenant governor candidate Karin Housley said she is confident she and her running mate have what it takes to defeat incumbent DFL Gov. Mark Dayton.

Meeting with the Tribune on Monday at The Trumble’s Restaurant in Albert Lea, Housley talked about what she and Honour will bring to the table if elected.

Housley, elected as District 39 senator in 2012, said she and Honour both are not career politicians. Honour is a first-time candidate, and Housley has only been in office for two years. She described Honour as being smart with finances and a down-to-earth person.

Though she earned a degree in communications, she now owns her own real estate business and has her own radio show.

Growing up, she said both of her parents were public school teachers, so she is a strong advocate of reforming education. She said the state should not continue to “throw money at a system that’s not working.”

She also thinks the funding formula needs to be changed to make it more equitable funding for Greater Minnesota students.

“Greater Minnesota is the backbone of who we are,” Housley said.

She noted she is also against much of the DFL-promoted spending, including the new Senate Office Building.

During her stop at Trumble’s, Housley talked with owner Barb O’Connor about the hardship the minimum wage increase is having on her business.

O’Connor also talked about how her property taxes have doubled in the last 10 years.

She said the state needs to get government under control and help its businesses grow and create more jobs.

Honour has told her if they are elected, he wants her to focus her time on recruiting businesses to the state, Housley said.

“It should be done away with,” she said. “It was another layer of bureaucracy that cost people a ton of money — that we didn’t need,” she said.

Housley said she is hearing about many of the same concerns as she travels across the state. She encouraged people to vote in the upcoming elections.